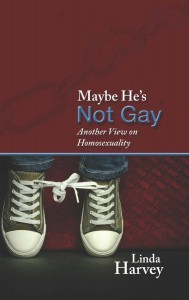 COLUMBUS, Ohio – Linda Harvey, author of the book Maybe He’s Not Gay: Another View on Homosexuality, announced that a guide for small group study for the book has been published on the Mission America web site.

“Youth groups, college roundtables, and adult Sunday school classes can now explore the many facets of the issue of homosexuality through in-depth discussions centered around Maybe He’s Not Gay,” said Harvey, founder and president of Mission America. Harvey is a Christian radio talk show host, a speaker, columnist and author who writes frequently about the homosexual political agenda and its destructive impact on America, particularly on our youth.

The guide is available at no cost on the Mission America site.

This highly-acclaimed book is tailored especially for teens and young adults but has been praised by adults who appreciate its common sense, biblically-based approach to a difficult and controversial issue. Published in January 2014, the book presents the view that adolescents who claim a “gay” identity are not getting the whole picture and have been misled into believing the “LGBT” identity is risk-free and inborn like race. They have also been persuaded, contrary to research and many personal testimonies, that there’s no hope of change.

By contrast, Harvey points out, the conservative Christian view remains the most realistic and hopeful one, that homosexuality is behavior and preference, not destiny, and many people have left it behind. Same sex attractions among the young are not a hopeless dilemma, but it’s important for adolescents to understand the foundation of human design as male and female and God’s hopeful plan for sexuality.

“The picture is truly compassionate and offers a positive life direction for America’s youth,” Harvey emphasized.

More information is available at the Mission America web site at www.missionamerica.com right on the home page.