Study: Trans Fat Hides in at Least a Quarter of Supermarket Foods 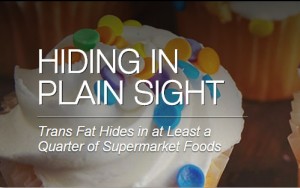 In most cases, the products’ trans fat content on the nutrition label doesn’t add up. The reason: an obscure loophole in federal food labeling regulations that allows food processors to round off less than half a gram of trans fat per serving to zero.

“Most people wouldn’t know they were consuming these unhealthy trans fat because when they see zero or ‘trans fat free’ on a label, they assume it means what it says,” Dawn Undurraga, EWG nutritionist, said. “With this important analysis, we hope to lift the veil on one of the food industry’s dirty little secrets and help shoppers reduce trans fat in their diet.”

EWG lists the items and categories with the most trans fat, including Pop Secret Popcorn and Shop Rite Theatre Style Popcorn.

A single serving of more than 400 foods in the Food Scores database contained enough trans fat to exceed the World Health Organization’s recommended limit of less than 2 grams per day for an adult who consumed a 2,000 calorie diet, the analysis said.

“The reason manufacturers don’t admit they sell food with trans fat is because they don’t have to, ” Undurraga added. “Half a gram doesn’t sound like much, but it can add up fast—especially for children.”

The EWG findings are significant because the U.S. Food and Drug Administration is reportedly poised to release a final regulation that could drastically reduce the use of partially hydrogenated oils in food. FDA has said the plan would help prevent tens of thousands of heart attacks and thousands of deaths a year.

However, it may not completely eliminate partially hydrogenated oils from the food supply. Food industry representatives have been meeting with FDA officials to find ways to continue using these substances, likely at levels that would not require disclosure.  And the FDA regulation now nearing final form is unlikely to close the trans fat labeling loophole.

“The FDA’s proposal, if and when it is made final, would be a huge step forward to reducing trans fat in the American food supply,” said Renee Sharp, EWG director of research. “But it would be a disservice to public health if the FDA continues to allow food companies to exploit the trans fat loophole to hide these dangerous substances in their products.”