Throughout the presidential election, President Donald Trump warned that there were millions of illegal immigrants casting votes all across the nation.

While twice failed presidential nominee Hillary Clinton and the mainstream media claimed his warning was baseless, a new study just proved he was right all along.

The Washington Times reported on a study from a research group in New Jersey, Just Facts, that found 5.7 million illegal immigrants voted in the 2008 election that landed Barack Obama and Joe Biden in the White House.

Fox and Friends revealed the shocking revelation on their show Tuesday: After examining post-election polling data, the group noted that previous estimates of illegal voters were way off. 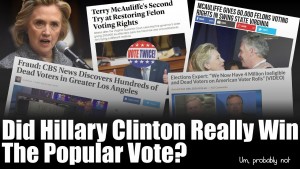 Just Facts President James D. Agresti and his team looked at data from Harvard/YouGov studies that are completed every two years, in which they question sample sizes of voters, and came to the conclusion that as many as 7.9 million noncitizens were registered to vote in 2008, and somewhere between 594,000 and 5.7 million actually cast a vote.

Trump has claimed these voters are to blame for Hillary winning the popular vote, and this study gives further weight to that assertion.

Agresti debunks claims by leftist groups that illegals did not vote in these overwhelming numbers, citing the fact that many databases don’t “verify voters who use fraudulent identities, and millions of non-citizens use them.”

Another flaw of leftist studies is they don’t consider illegal immigrants misidentifying themselves as legal. “This is irrational,” Agresti explains, “because illegal immigrants often claim they are citizens in order to conceal the fact that they are in the U.S. illegally.”

While this voter fraud is devaluing our elections, Trump is taking action to bring an end to it.

In addition to ramping up the efforts of the Immigration and Customs Enforcement, he signed an executive order in May directing Vice President Mike Pence to investigate voter fraud and voter suppression.

Not only does this study prove the necessity of the  special commission led by Pence, it proves that Donald Trump’s observations were accurate, and he is sticking to his word and taking action to protect our democracy.