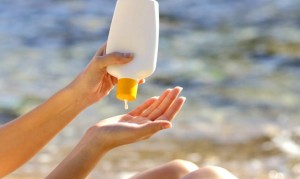 (NaturalHealth365) Chronic low vitamin D levels have already been linked with an overuse of sunscreen, which has blocked many populations from receiving enough of the sun’s nourishing rays for adequate vitamin D production. Now, in a bizarre revelation, recent research is showing that sunscreen lotion can also break down into dangerous chemical compounds on the skin when exposed to sunlight and moisture!

Moscow State University researchers have found that an ingredient in many sunscreens called avobenzone decomposes upon contact with sunlight and water into dangerous, unhealthy chemical compounds on the skin. Avobenzone is triggered into becoming toxic through a series of chemical reactions.

Avobenzone is a derivative of dibenzoylmethane, a chemical compound that is the most popular UV filter in use today. It was patented in 1973 and approved for use in sunscreens by the FDA in 1988. Avobenzone has the ability to block ultraviolet light in a wide range of wavelengths. Because of this, it is used in a number of skin products including creams, lotions, lipsticks and other cosmetics.

UV filters like avobenzone absorb ultraviolet light due to their structures. It then transforms the waves into different lengths not harmful for the skin, in effect changing the sunlight into thermal energy. While this aspect of the chemical is safe, Russian scientists found that it can also break down into hazardous chemical compounds, especially in water.

Exposure to moisture plus sunlight can make sunscreen toxic

The Russian experiments simulated real-life use of sunscreen. Chromatomass spectrometry was used in the research to confirm the findings; it is known as an effective, reliable method of conducting quantitative and qualitative analysis even very complex chemical compound mixtures and structures.

Some of these chemicals can change into lachrymatory mixtures, which are what riot police use when breaking up violent protest meetings. The researchers fear that some of the chemical reactions between sunscreen and water could cause harmful effects to the kidneys, liver and nervous system.

Another reason to cut back on the use of sunscreen lotion

The prevalence of the chemical avobenzone in so many health and beauty products makes this news particularly alarming. While its addition helps to block the damaging effects of getting too much sun, having contact with water could be bringing out other potentially harmful qualities.

Using too much sunscreen is also a likely factor in low vitamin D levels.

The researchers are now studying the effects of avobenzone when it comes into contact with saline water (such as ocean water.) The presence of salt could be triggering additional chemical reactions. The researchers fear that some of the reactions between sunscreen, chlorine and/or salt could cause or exacerbate even more health problems in the vital organs and nervous system.