(WNS)–When Marius and Ruth Bodnariu sent their daughters off to school one day last fall, they had no idea they would not come home. And they certainly never imagined their three sons would also be gone before the next sundown—all five children seized by the Norwegian government because of their parents’ Christian beliefs.

Tens of thousands of citizens across the globe have joined in protesting the Norwegian Child Welfare Agency’s seizure of the children after a school principal reported their parents for “indoctrinating” their children.

The Bodnariu family lives in Naustdal, Norway, where Marius works as an IT engineer for the mayor’s office and Ruth is a nurse at the local hospital. Marius is Romanian and first met Ruth, who is Norwegian, when they both served at Open Doors Foundation, a Romanian Christian charity that serves disadvantaged children and families. They were married and became members of the Philadelphia Pentecostal Church in Bucharest. The couple eventually moved to Norway to raise their children in Ruth’s hometown. But their idyllic village life turned into a nightmare last November, according to a Facebook post written by Marius’ brother, Daniel Bodnariu. 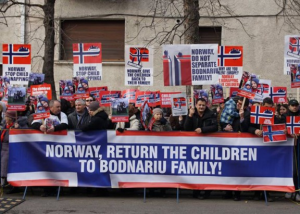 On Nov. 16, the Norwegian child welfare agency, called Barnevernet, removed the Bodnariu’s two daughters from school without their parents’ knowledge. Later that day, police arrived at the Bodnarius’ home and removed two of their three sons, leaving the 3-month-old baby with Ruth. Marius rushed home from work, and he and Ruth went to the police station to find out what was going on, but received no answers. The next day, police came again to the home and removed the baby, claiming Ruth’s display of tears at the police station the day before posed a danger to the child, according to a relative, Cristian Ionescu.

Two days later, Barnevernet officials informed the couple the children were “integrating well” into two separate foster homes. The Bodnarius were accused of “Christian radicalism and indoctrination.” One of the officials allegedly said to Ruth, “The kids don’t even miss you. What kind of parents are you?” ChurchMilitant.com reported.

On Dec. 2, Daniel Bodnariu posted on Facebook the couple had finally received documents detailing what led up to the removal of their children. The investigation started when the principal where the girls attend school notified Barnevernet she had concerns about how the girls were disciplined at home because the parents were “very Christian,” as was the extended family. She said the family had “a strong faith that God punishes sin” that “creates disability in children.” The principal noted although the girls were creative, intelligent, and showed no signs of physical abuse, she believed the parents needed “help and guidance” in raising their children.

Barnevernet workers interrogated the girls at school regarding their home life. The girls reported they sometimes hid things from their parents for fear of being punished by as pulling an ear or a slap across the behind or upside the head, but neither was afraid to go home.

One of the girls gave an example that the baby reached out and took Marius’ glasses off, whereupon he shook the baby “as a rag.” But Marius reports the story differently: He leaned over the baby and was thrilled when, for the first time, the baby reached out for him, so he took him in his arms and bounced him.

“Children can see things differently, and sometimes misinterpret some of our actions, or certain events,” Daniel Bodnariu wrote. “You can easily manipulate a child to say something that is not true. The law in Norway gives almost total credibility to the child and none to the parent. Some situations are seen differently by children [and] it seems a monstrosity to exploit this to the detriment of the family.”

The documents also revealed the baby received X-rays and a CT scan that showed no signs of abuse. In a follow up interrogation, the daughter reiterated Marius shook the baby, but then said, “I am tired. I don’t know what else to make up.”

Barnevernet has been under fire from the international community for years, accused of targeting immigrant families for child removal due to cultural misunderstanding and prejudice. A website called StopBarnevernet profiles dozens of stories of children being taken from families who immigrated from Lithuania, Brazil, Czech Republic, United States, Slovakia, Russia, India, Turkey, Sweden, and Iraq. Families who have had their children taken by Barnevernet also connect on a Facebook page called “Norway, give us back the children you stole.”

The Anti Juvenile Justice Agency (AJJA) is a European information agency that reports on the dangers of countries defining “juvenile justice” apart from the nuclear family.

“The main dilemma [in modern democratic states] is how to provide for and protect children without intruding on the parents’ rights of privacy and their right to a family life of their own choosing,” AJJA reported.

The Bodnariu’s story went viral via social media and church networking. Friends and family organized a variety of campaigns, from emailing Norwegian government officials to street protests. Mass demonstrations drawing tens of thousands have been held in over a dozen countries, with more planned through the end of the month. Cristian Ionescu started an online international petition on the family’s behalf. It had over 56,000 signatures as of today.

A delegation of 11 Romanian officials met with Barnevernet officials Wednesday to advocate for the release of the Bodnariu’s children, reported NRK, a Norwegian broadcasting company. But so far, the children remain in the custody of Barnevernet.

Thomas Sutherland posted on StopBarnevernet that he was a victim of the agency when he was a child. Now an adult and living in England, he stated he recently started therapy to deal with his childhood trauma and discovered he wasn’t alone in his experience.

“I would love to help in this cause, and I wonder if my story could help in this battle [to] ensure other families do not have to go through the same thing,” Sutherland wrote. “I know from firsthand experience how most children feel [due to that] proposition: unwanted, confused and alone.”