Supreme Court is Wrong — Gay Unions Are Not ‘Marriage,’ Says Creator of New Film on Homosexuality

(Los Angeles) – The producer of a new award-winning movie about homosexuality asserts that gay unions are not “marriage.” Filmmaker and best-selling author Ray Comfort, whose movies have been seen by millions, says that the Supreme Court’s redefinition of marriage doesn’t make it marriage in God’s eyes.

“Only one man and one woman can be united in the institution of marriage,” Comfort said. “Since the beginning of time, that’s the only union that ‘God has joined together.'”

“A handful of justices may legalize the union between people of the same sex – and perhaps eventually multiple people – but redefining this as ‘marriage’ would be like me declaring that my VW Beetle is a Lamborghini. The two are nothing like each other. To believe otherwise is to deceive myself,” Comfort said.

“Marriage is an institution created by God and pictures the relationship between Christ and His holy bride, the Church, and we cannot redefine it to suit our whims,” Comfort concluded. 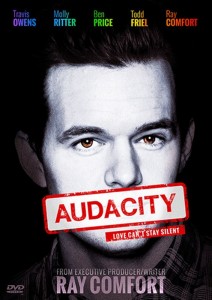 In his new scripted movie, “Audacity,” Comfort addresses questions about homosexuality, and gets to the root of the gay marriage issue: are homosexuals born that way? The film shows both gay and straight individuals changing their minds about the question when a simple line of reasoning gives them a new perspective.

“The issue is coming to a head in society, but what needs to change isn’t the definition of marriage, but our view of it,” adds Comfort – something the filmmaker hopes to achieve through his movie.

The trailer for “Audacity” can be seen here: www.AudacityMovie.com.