Survival of the kindest? 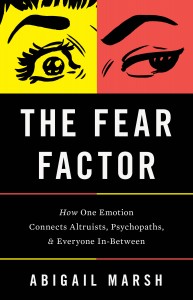 (WNS)–A secular neuropsychologist set out to answer the question: Why some humans are willing to risk their lives for others. And she found interesting results hiding in the brains of altruists.

Abigail Marsh of Georgetown University describes her research and its implications in a new book out this week, The Fear Factor (Basic Books). She and a team of researchers looked at what they called “extreme altruism” by doing imaging and psychological studies on a group of people who donated kidneys to strangers.

“Such donations meet the most stringent definitions of altruism in that they represent an intentional behavior that incurs significant costs to the donor to benefit an anonymous, nonkin other,” the 2014 study’s abstract stated. Marsh found that, compared with a control group, the kidney donors had enlarged, faster-responding right amygdalas, the brain’s emotional control center.

I asked Marsh what could account for the beefed-up amygdalas of altruists, and she cited a combination of nature and nurture.

“While there does appear to be some genetic component to altruism … this is a long way from altruism being fixed or hardwired from birth,” she said, adding the amygdala can change over time, and altruistic behavior tends to be self-reinforcing.

Discoveries like this one from the field of neuropsychology present challenges and opportunities for Christian psychologists such as Jason Kanz of the Marshfield Clinic in Eau Claire, Wis. Some neuropsychologists take brain biology to secular extremes.

“Taken to the end point, the assertion could be made that all human behavior is predictable and biological,” Kanz wrote in 2015. “Certainly, vocal atheistic neuroscientists such as Sam Harris posit that all behavior is determined and that free will is a delusion.”

But Marsh and Kanz both assert the brain has flexible neurological wiring and responds to experiences. To paraphrase Kanz, neurological health can paint a picture of spiritual wholeness.

“So when Jesus tells us to love one another like He loves, or when Paul tells us to put on the new self, we are being called into a life not only of greater other-centeredness and greater love, but I would argue, deeper neurological integration,” Kanz told me.

Not only does neuropsychology offer greater understanding of how God designed our brains for empathy, caring, and love, it also contradicts Charles Darwin’s theory of evolution. Survival of the fittest requires each individual to put his or her own needs above the needs of others, but Marsh’s research shows some people’s brains are wired to do the opposite.

“Altruistic behaviors reduce the immediate fitness of the altruist to improve the fitness of another individual,” Marsh and her research colleagues wrote. “As such, altruism has long been seen to pose singular problems for evolutionary theory.”