Survival of the Richest: How the Corruption of the Marketplace and the Disparity of Wealth Created the Greatest Conspiracy of All 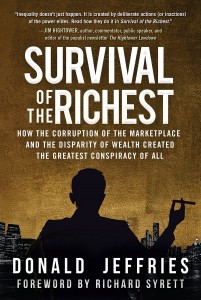 Here’s a fresh look at economic inequality in America. Survival of the Richest scrutinizes how the collective wealth of America has been channeled from the poor and middle class into the hands of a few elitists. American industry has been gutted, with wages and benefits stagnant or reduced, thanks to disastrous trade deals, outsourcing, and the crippling of unions.

The Occupy Wall Street movement, and the presidential campaigns of both Bernie Sanders and Donald Trump, reveals how more and more people who are struggling understand that the system is rigged against them.

While Americans have been trained to direct their scorn at welfare recipients and the poor in general, a tiny handful of plutocratic elites have profited on an unfathomable scale through corporate welfare and other perks. Unimaginable salaries and bonuses for the 1%, contrasted by layoffs and reduced pay for the majority of the workforce, along with increasing calls for austerity measures and lowered standards of living, have become the “new normal” in America.

Author Donald Jeffries argues that this record economic inequality is more than an unintended consequence of globalism. In Survival of the Richest, he shows how the consolidation of wealth may well prove to be the greatest conspiracy of all.

Available at all good bookstores and at americanfreepress.com or amazon.com.