“The ‘Damascus’ Pronouncement. Behold, Damascus shall cease to be a city; It shall become a heap of ruins.” Isaiah 17:1

Syrian state media has blamed Israel for a purported airstrike on a military base south of Damascus recently.

Syria’s official SANA news claimed that the country’s air defense had also intercepted two Israeli missiles over the el-Kiswah area. As official policy, the Israeli military does not comment on military activity in Syria.

According to Rami Abdel Rahman, director of the Britain-based Syrian Observator 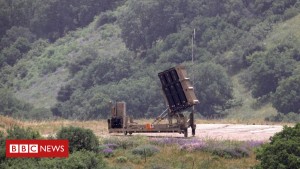 y for Human Rights, the base targeted by the alleged Israeli missiles was an “arms depot belonging to Hezbollah and the Iranians,” AFP reported.

Meanwhile, on Tuesday, the Israel Defense Forces instructed bomb shelters to be opened in the Golan Heights due to Iranian activity in Syria.

“The IDF has detected irregular Iranian activity in Syria and is preparing the civilian population on the Golan Heights accordingly, as well as defensive systems. Any aggression against Israel will be met with a severe response,” IDF Spokesperson Lt. Col. Jonathan Conricus said in a statement.

According to intelligence, Iran is thought to be in the advance planning stage for a strike on Israel in retaliation for a purported Israeli airstrike in early April on Syria’s T-4 airbase near Homs that is used by the Iranian Revolutionary Guards Corps.