Syria declares end of ceasefire, US seeks clarification from Russia

Caption: The entrance of the Waer district is pictured in the central Syrian city of Homs, Syria September 19, 2016. © Omar Sanadiki / Reuters(RT News) – The initial seven days of the nationwide ceasefire in Syria have run their course, the Syrian Army has declared. However, it failed to add whether the truce will be reinstated in the near future. In response the US has called on Russia to clarify the statement made by the Syrians.

“It was assumed that the ceasefire will present a real chance to end the bloodshed, but terrorist groups did not adhere to any of the points of the agreement on a ceasefire, the number of violations on their part has exceeded 300,” reads the statement published by SANA news.

According to the statement, the Syrian Army has “shown the highest level of endurance in confronting the abuses by terrorist groups.” 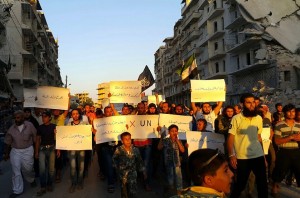 FILE – In this Tuesday, Sept. 13, 2016, file photo, activists in Syria’s besieged Aleppo protest against the United Nations for what they say is its failure to lift the siege off their rebel-held area. A fragile cease-fire, brokered by the United States and Russia and now in its seventh day, has mostly held despite numerous violations. Banners read in Arabic: ‘Hunger better than humiliation,’ one banner read. ‘X the UN’. (Modar Shekho via AP)

The Russia-US brokered cessation of hostilities came into force on September 12 at 16:00 GMT. The deal was signed by Russian Foreign Minister Sergey Lavrov and his US counterpart, Secretary of State John Kerry, after marathon talks in Geneva earlier this month.

The Syrian Army claims that “armed terrorist groups took advantage of the declared ceasefire” in order to regroup and mobilize additional forces. It adds that the militants aimed to continue attacks on “residential areas” and military sites in several regions, including the war-ravaged city of Aleppo.

Despite the statement by the Syrian Army, US Secretary of State John Kerry said he still hopes the ceasefire can hold, AP reports. He noted that the truce did allow some aid to reach Syria, but stressed that the cessation of hostilities did not produce the desired decrease in violence.

“We have not had seven days of calm and of delivery of humanitarian goods,” Kerry said on the sidelines of the UN General Assembly on Monday. He added that both Russian and US officials are negotiating in Geneva to bring additional aid to civilians in Syria, including for the besieged areas in Aleppo.

“The International Syria Support Group meeting will be a very important signals check for members of this group to assess the agreement… where we are and what next steps need to be taken and where we need to see more improvement,” Toner said. 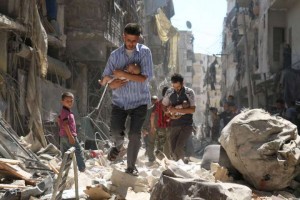 On Sunday, the Russian Defense Ministry said that the ceasefire had been observed only by the Syrian government troops, while the US-backed rebels had tried to use the truce to strengthen their forces.

“During the sixth day of the ceasefire… only the Syrian government troops have been actually observing the moratorium on combat operations,” Russian Defense Ministry spokesman Major-General Igor Konashenkov said.

The cessation of hostilities also suffered a big setback on Saturday after US-led coalition airstrikes hit Syrian government forces. Some 62 soldiers were killed and over 100 wounded as a result of the attack. While Washington called the incident a mistake, Syrian leader Bashar Assad spoke of “flagrant aggression.”