Tales of Faith, Hope and Love in the Midst of Charlotte Chaos

“We always say, ‘The world needs more Jesus in the flesh.’  Jesus didn’t just come out and pray. He engaged people, He loved them, He fed them, He healed them … it was [all about] relationship.” – Trent Post

(Charlotte, NC) — [CBN News] Pastors and faith leaders in Charlotte are offering hope and spiritual healing in the wake of the killing of Keith Lamont Scott, a black man shot by a black police officer. Police say a gun was recovered on the scene. His family, however, insists he didn’t have a gun, but a book. (Screengrab via CBN News)

Violent protests erupted in the city recently as a result of the shooting. Dot Cannamela lives in the same neighborhood as Scott and she told CBN News that God protected her by delaying her commute by 15 minutes that night.  “I prayed with a pastor friend of mine for safety and protection. I didn’t have a good feeling,” she recalled.

The neighborhood is by UNCC and dozens of people came out and harassed officers and lab workers. Cannamela said what she experienced could only be described as chaos. “The violence and destruction, people cannot imagine,” she said. “There was vulgarity … I was called names that I don’t even want to tell you,” she added.

Cannamela said that the violence and tension was so high that she could not approach the victim’s family to share the words of encouragement the Lord put on her heart. “I want to give encouragement, plant a seed with people, (to) my brothers and sisters in the Lord and people unsaved that we can overcome and God is in control.”

“I believe the leaders in this town, in this state, in our government they (shouldn’t) take this lightly and my prayer to the Lord is that we try to be in peace and unity and show love to people. What we need to try to do here is show love to people. That’s what Christ represented,” she added. 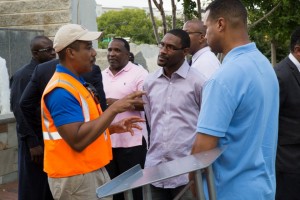 He shared what he saw at the protests, many of which, he said, were peaceful. “We saw some people protesting silently, obviously we saw the police officers, who at that time were very reserved, standing in a straight line, just standing there quietly and then we did see some protesters down there. You could tell they were there just to cause trouble,” he explained.

The shooting death of Scott came just days after another shooting in Tulsa, Oklahoma. Terence Crutcher was shot and killed by an officer [the previous] Friday. In both cases, police said they felt threatened and were forced to take lethal action.

The Billy Graham Evangelistic Association sends it Rapid Response team of chaplains all over the world to minister in crisis situations. The team deployed to Ferguson, Missouri, and other cities that have seen unrest after police shootings. The team was in its hometown of Charlotte to offer a beacon of hope amidst the protests.

Kelly Burke, manager of Emergency Response and Logistics for BGEA’s Rapid Response team told CBN News, “We had our chaplains spread out in some teams.”

“Some were in the area where the shooting took place last night where they heard the shot. They saw some of the windows broken,” Burke said during the interview.

He recalled that one man had asked for prayer. “He just said I’m overwhelmed with life right now. And that’s a constant theme that we hear often,” said Burke.

When asked how churches can help bridge the gap between law enforcement and the inner city communities. “To be engaged,” he answered.

“Our Decision America tour right now — that Franklin Graham is a part of — is largely that. It’s kind of a reactive impulse, that we all have, to maybe withdraw inside the church while things are tense and chaotic out there on the streets,” he said. “They’re tense and chaotic on the streets because they don’t know the hope. They’re looking for answers. They’re looking for solutions.”

Pastor Anthony said that anger is what is fueling the black community in light of black men killed by white, and sometimes even black police officers. “I believe the gentleman who got shot in Oklahoma … one of the gentleman in the helicopter said he looks like a ‘big dude or a bad dude or something.’  Well he’s not just a bad dude,” said Anthony.

There is also another cause for the anger among blacks said Anthony. “The legal system that failed, in a lot of people’s opinions, to prosecute these officers for the way that they handled the situation and the way that they took the individual’s life,” he said.

Meanwhile, communication and humility between officers and the black community is part of the solution Anthony told CBN News. “The officer — when he goes out into the community — he needs to check his attitude,” said Anthony.

“Are these just people you’re lording your authority over and nobody has a right and you have all the power? I think that’s a very dangerous attitude to have.”

He said blacks have a role to play in moving forward as well. “At the same time there are plenty of us in the black community that when we look at these officers we can’t just look at them as the enemy.”

America’s inner cities are in need of people who will go and show the love of Christ, Trent and Carmen Post told CBN News. The couple head Make Your Mark, an international, non-profit ministry based in Charlotte.

The couple moved into downtown Charlotte more than a decade ago, with no other ambition than to renovate and re-sell an old home. Within months, they started sharing their lives with drug addicts, prostitutes and street kids who felt they have no hope.

“They feel marginalized, they feel forgotten about, they have no voice and we like to stand in the gap [for them] and we know Jesus does, too,” Trent said.

He emphasizes that the key to understanding the needs of people in the inner cities is relationship. “We always say, ‘The world needs more Jesus in the flesh.’  Jesus didn’t just come out and pray. He engaged people, He loved them, He fed them, He healed them … it was [all about] relationship.”

Carmen said a Facebook post showed her the need to drop her defenses, let go of her need to be right and listen to the pain of others. After she wrote, “All Lives Matter” in relation to a “Black Lives Matter” post, one of the mothers of a child in their ministry responded in pain and anger.

“All I could do was selflessly understand her and put myself in her shoes and put anything that I thought away, and, you know, I think that’s what it takes. I think it takes us as Believers to put what we think, what we’ve been taught … put it away for the Gospel.  We don’t have to be right, we don’t have to prove a point, but we [should] put it away for the Gospel so that people are feeling loved.”