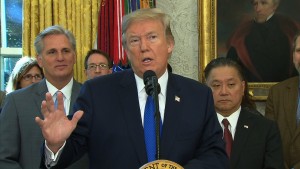 (WNS)–The GOP made good Wednesday on a major promise by passing sweeping tax cuts, and now Republicans have to sell the reforms to the American people.

The most significant rewrite of the U.S. tax code passed without a single Democratic vote or a public hearing. Republicans tweaked the bill all the way up until the same day it cleared. The legislative lift marks the largest reform of the tax system since 1986, and Republicans did it in record time. House leaders unveiled the first draft of the legislation Nov. 2, and Congress passed the bill onto President Donald Trump on Dec. 20, just in time for Christmas.

The bill changed so many times over the last six weeks that most Americans aren’t sure of the legislation’s details and how it will affect them. But Republicans aren’t worried about that; right now, it’s time to celebrate. “Results are going to make this popular,” House Speaker Paul Ryan, R-Wis., declared this week.

The final bill, nearly 500 pages long, permanently lowers the corporate tax rate from 35 to 21 percent. Originally the Trump administration envisioned reducing the seven individual tax brackets down to three. The final bill keeps seven but at different rates: 10, 12, 22, 24, 32, 35, and 37 percent for top earners.

About 48 percent of households will receive a tax cut of greater than $500 starting in 2019, according to the Joint Committee on Taxation. Those savings are projected to dwindle in the following years. The cuts to individual rates expire after 2025—a concession Republicans made to comply with Senate rules.

Another major feature of the bill is that it kills Obamacare’s individual health insurance mandate after 2019. “We—I hate to say this—but we essentially repealed Obamacare because we got rid of the individual mandate, which was terrible,” Trump asserted.

The president celebrated with congressional Republicans at the White House, but voters still aren’t sure how they feel about the legislation.

A Monmouth University poll released Monday found 47 percent of respondents disapproved of the legislation, and only 26 percent approved. Nearly a third either had no opinion or were waiting for more information. A Politico/Morning Consult survey found a 42 percent plurality of voters supported the legislation, and 39 percent opposed it.

Democrats say most Americans aren’t warm to the tax rewrite because they believe Republicans carved out benefits for the rich. “The Republican tax bill will cement the Republican Party as the party of the wealthy and the party of corporations, against the middle class and the working people of this country,” said Senate Minority Leader Chuck Schumer, D-N.Y.

But the GOP isn’t going to let critics rain on its parade—even if voters aren’t confident in the legislation yet. “My view of this: If we can’t sell this to the American people, we ought to go into another line of work,” said Senate Majority Leader Mitch McConnell, R-Ky.