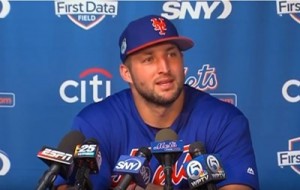 NASHVILLE (BP) — As a homeschooled child, Tim Tebow sat down with his parents and made a list of goals he had for his future, including becoming a baseball player and a Navy SEAL. Then he reviewed those goals daily with his mother, charting progress along the way.

While God never called Tebow to be a SEAL, he writes in a new book that the personalized guidance of homeschooling played a significant role in his eventual success as an athlete. The former Heisman Trophy-winning quarterback for the University of Florida, in “Know Who You Are. Live Like It Matters,” published by WaterBrook, relays a series of lessons aimed at homeschoolers from his perspective.

“I wanted to encourage [homeschoolers] because these years are such impressionable times,” Tebow, now a minor league baseball player and SEC Network commentator, said in a news release. “I want these students to know that I went through what they are going through. They matter. God has a plan for them.”

Tim Tebow meets the press as a member of the Columbia Fireflies, the Class A South Atlantic League affiliate of the New York Mets.

Tebow provides moral and ethical advice in each lesson, illustrating principles with stories from his childhood. In a lesson on the importance of Scripture memorization, he remembers how his mother taught him Bible verses by turning them into songs. Another lesson talks about trusting God and references Tebow’s career as a professional football player.

“Trusting God with all our hearts doesn’t mean our prayers are always going to be answered exactly how we want,” Tebow writes. “Still, we are called to seek him. We are called to trust him.”

Homeschooling has increased steadily over the years, according to the U.S. Department of Education. In 1999, the first year a report was issued by the department, there were 850,000 children being homeschooled in America. In 2013, the most recent report, there were more than 1.7 million children being taught from home.

A longtime advocate for homeschoolers, Tebow has been promoting the “Tebow Bill” in state legislatures across the country. The measure would allow homeschooled students greater freedom to participate in sports at local public schools.

Texas became the first state to adopt the Tebow Bill in April. The Texas version of the bill allows homeschooled students to play high school sports for a fee.

Tebow recalled his own homeschooling experience to explain why the practice may be right for some families.

“There were times I wondered what regular school would be like, and some days I even wanted to go, but there were so many things to be grateful for,” Tebow said in the news release. “My schedule was flexible, I could study things that I found fascinating and I had the flexibility to go on mission trips.”

The state of Florida allowed Tebow to play high school football, which allowed recruiters to notice the young star and ultimately led to his college career with the Florida Gators and later his National Football League career with the Denver Broncos, according to ESPN.

This year, the former NFL quarterback has drawn media attention for ending his four-year sports hiatus by signing a minor league baseball deal with the New York Mets. Tebow’s presence in the league will mean $3.1 million in increased revenue and a 50 percent attendance increase for opposing teams, ESPN reported.

When Tebow’s Columbia Fireflies, a Class A South Atlantic League affiliate of the Mets, stopped in Lexington, Ky., for a series, the Kentucky Baptist Convention’s Kentucky Today news service reported Tebow is using his baseball career as a platform to trumpet eternal truth.

“If I can take a platform that football and baseball and whatever else has given me and I can go into a hospital, make the kids smile, if I can inspire people … we’re doing something,” Tebow said according to Kentucky Today. “That’s what I’m passionate about, and I’ve always been grateful for a platform.”

The SEC Network also has opted to give Tebow a multiyear contract extension which will extend his time as a commentator for the network, according to ESPN.

In addition to writing books and playing baseball, Tebow works with the Tim Tebow Foundation, which assists people with special needs. Every year the foundation works with local churches across the globe to host A Night to Shine, where people with special needs are invited to a prom night experience. Last year churches in 11 different nations hosted 75,000 guests at the event.

In his book, Tebow extols the importance of striving for something bigger than fame in every realm of life.

“When we think about living bigger, it comes down to letting Jesus shine through us in what we say, how we act, how we lead, how we serve, how we interact with others, where we invest our time, what we do with our talents,” Tebow writes. “This is why faith matters.”