Technology in place for Bible’s ‘mark of the beast’

(WND) It was once something out of science fiction. Now, it’s just another day at the office. A company in Wisconsin, Three Square Market, has introduced a “voluntary microchipping” program for employees, with just under half its workers participating.

The company claims it is the first use of this technology in the United States and proponents assert it will allow employees to log on to computers, access restricted areas and purchase food simply through the use of the chip. The company, which specializes in “micro market technology,” hopes the chip could eventually be used in “self-checkout/self-service applications” in businesses like convenience stores and fitness centers.

The RFID microchips are not quite Orwellian. They have limited range of only a few feet and do not have GPS, so employees cannot be tracked. Officials also claim data in the microchip is encrypted. Still, it’s simply the latest incident in how private companies are developing technology which could be used by governments or by powerful interests to compile data on individuals, even those who do not voluntarily accept a microchip.

Because of concerns over privacy, several states have already passed laws banning involuntary implanting of RFID microchips, including in the mentally impaired. However, Chief Executive Officer Todd Westby of Three Square Market claims RFID will be “the next thing that’s inevitably going to happen, and we want to be part of it.”

“Eventually, this technology will become standardized allowing you to use this as your passport, public transit, all purchasing opportunities,” he said, as quoted in the UK Telegraph.

Such chips, if widely used and expanded in their capabilities, could spell the end of personal privacy, especially if combined with a cashless society.

Patrick Wood, an economist and expert on the Trilateral Commission, technocracy and global governance and the author of “Technocracy Rising: The Trojan Horse of Global Transformation,” argues the cashless society has long been an item on the checklist of global bankers because “it really bugs them that anybody is still living outside the system,” and using cash so their spending cannot be tracked. If Chief Executive Officer Westby’s prophecy comes true, such chips embedded in your body could conceivably be required to purchase goods.

Transhumanists have also championed the merger of man and machine, including devices which would create a two-way interface between the human brain and computers. 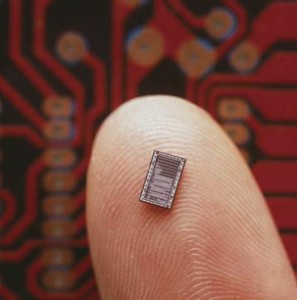 Aside from convenience, proponents argue such technology could provide medical breakthroughs for terrible diseases such as Alzheimer’s. However, these devices could also be open to hacking in the same way as pacemakers are already vulnerable. Similarly, tech magazines such as WIRED have written in the past about the possibility of hacking RFID chips, which would allow thieves to steal people’s identities and money and enter supposedly restricted areas.

Carl Gallups, a pastor, former law enforcement professional and author of the end times examination “When The Lion Roars,” has long argued advancing technology ominously parallels some of the prophecies of the last days in Scripture. Furthermore, noting how institutions such as the United Nations have openly written about the need to use “biometric markers” on the world’s population, Gallups suggests such technology may not stay purely “voluntary” for long.

Gallups said he is not against technology and indeed uses the most cutting-edge technology he can find for his own projects. However, he said Christians, who are aware of the fallen nature of man and of the world, should often expect the worst.

“I understand the pervasive evil that also can erupt within these 21st century tech advancements,” said Gallups. “When one considers the warnings of the scriptural prophetic markers of the very last days before the return of Jesus Christ, it quickly becomes apparent that ours is the first historical generation to possess the ‘technologies of the Bible’ necessary to fulfill those prophecies.”

“As with many of the newer technologies, there are wonderful potential benefits for improving the quality of human life. And most make that truth their primary ‘selling point.’ The problem is that we live in a desperately fallen world filled with evil people and powers vying to get their hands on the most invasive technologies possible for the purpose of ruling over the rest of us – in any fashion possible.”

Gallups said this particular technology is not especially new, only its use in this country. However, he argued it wouldn’t take much for such technology to be adapted to serve nefarious purposes.

“This particular microchip technology has been heavily reported on and in development for a number of years,” he told WND. “But now we see its use and mainstream commentators describing the ways it can be and ‘will’ be used. Interestingly, at the same time, we also see the warnings that are coming from some in the tech industry itself regarding the use of such technologies.

“I am not saying, regarding the latest chipping technology being used in Wisconsin, that ‘this is that,’ but I am saying that we are at least looking at the precursor to the type of technologies and ‘marking systems’ that will eventually be used in the Antichrist kingdom that is to come.”

Gallups cited Revelation 13:16-17, which reads:  And he causeth all, both small and great, rich and poor, free and bond, to receive a mark in their right hand, or in their foreheads: And that no man might buy or sell, save he that had the mark, or the name of the beast, or the number of his name.”

The pastor argued the combination of a cashless society and technology which could be required to purchase goods makes it very easy to see how such a prophecy could be fulfilled.

“Make no mistake about it, regardless of the mocking of the naysayers, there will be a soon-coming generation that will see this prophesied ‘beast’ and the globalist kingdom that he/it controls – by a ‘marking’ system of identification,” the pastor intoned. “Without it, the Bible says, no one will be able to buy or sell – in other words – if you don’t take the mark (chip?) you will die. Again, we are the first generation to see this potential technology in its nascent use.

“We are, no doubt, living in profoundly prophetic times.”

What should believers do? Gallups emphasizes the use of RFID chips by a company in Wisconsin isn’t some clarion call the end is nigh. However, he does say believers should be skeptical about reassurances such technology will never be used to abuse people’s privacy.

“Even the inventors of the technology now in question admit that there are potentially serious ethical questions arising from its use,” claimed Gallups. “Yet, we are patted on the head with smooth language and assured, ‘All will be well, you can trust us.’ And we are also assured that if the company ever decided to track their behavior or data use – don’t worry – we will notify you.

“Not only do I not take solace in these smooth and deceptive words, but they stand as a stark prophetic warning within my spirit.”