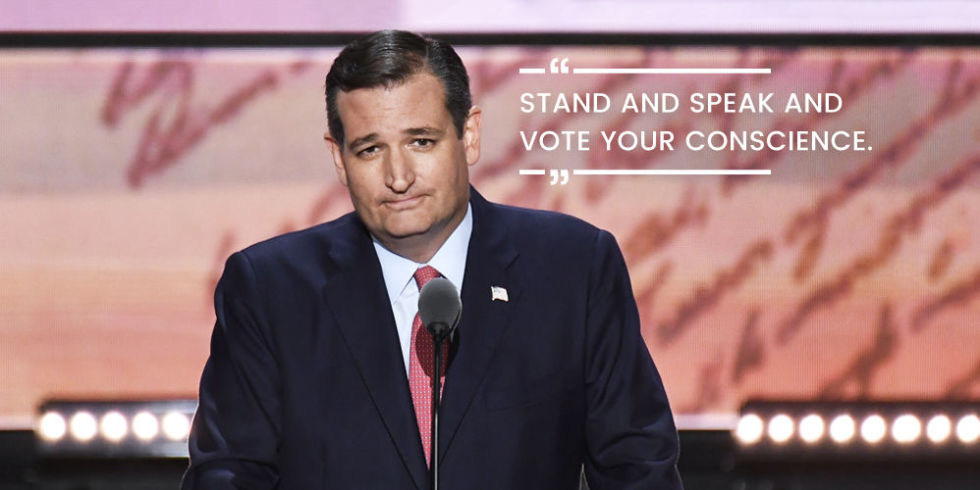 In a raucous moment at the Republican convention, Ted Cruz refuses to endorse Donald Trump

As Cruz arrived at the Republican National Convention in Cleveland two months after ending his own bid for the party’s nomination, the single biggest question going into the evening was: Would Cruz endorse Trump?

The short answer: No.

Cruz opened his prime-time speech to cheers by congratulating Trump for winning the nomination the previous night. He closed his speech 21 minutes later to boos after urging Americans to vote for whomever their conscience demanded.

It was an extraordinary moment at a nominating convention, as the split in the Republican Party’s frayed unity seemed to grow wider.

A slew of prominent Republicans had already skipped what was expected to be a coronation of a candidate many couldn’t support. Even many of those in attendance and willing to endorse Trump seemed unwilling to embrace him. On the first day of the convention, House Speaker Paul Ryan admitted Trump is “not my kind of conservative.”

The tension seeped into other corners as well. At a pro-life luncheon in downtown Cleveland July 20, a slate of speakers spoke of the importance of advancing the pro-life cause, but they didn’t hail the presidential candidate. Most mentioned Pence instead of Trump.

Tony Perkins of the Family Research Council mentioned “making America great again” (Trump’s ubiquitous campaign slogan), but he also acknowledged the hesitation some social conservatives feel: “We may not be exactly sure what kind of president he will be, but you can be darn sure he’ll be a better president than the alternative.”

After the event ended, Marjorie Dannenfelser of the pro-life Susan B. Anthony List said she understood the tension as well, but she emphasized the importance of maintaining pro-life momentum.

“I think it presumes upon the future to think that we can disengage now. I think it assumes that future generations will somehow bring the court back in ways that we can’t possibly know,” she said. “What we have to do is the best we can do. … I think that’s where we are.”

As Cruz took center stage on Wednesday night, he didn’t suggest Trump was the best we could do.

Indeed, his remarks nearly sounded like a campaign speech for himself. He spoke of the need to defend the Constitution—a constant theme in his stump speeches during the primaries. At a reception earlier in the day for supporters of his primary campaign, Cruz stood on Cleveland’s waterfront as the crowd chanted: “2020!”

The New York delegation booed in anger as delegates realized Cruz wasn’t going to endorse the nominee from their home state. (At least some in the hall cheered.) But the boos became a roar, as Cruz ended his speech urging voters to not stay home, but to “vote your conscience, vote for candidates up and down the ticket who you trust to defend our freedom and to be faithful to the Constitution.”

The fervor died down by the time Pence took the stage to deliver his acceptance speech as the party’s vice presidential nominee. Pence outlined a slate of conservative principles, and he hailed Trump as a candidate who “will never quit.” While Pence mentioned “the sanctity of life,” he didn’t expand on the social issues he’s focused on during his own career.

If other social conservatives wondered about Pence’s commitment to Trump, he tried to dispel doubts months after endorsing Cruz over Trump in his home state’s primary. By Wednesday night Pence said he joined the Trump campaign “in a heartbeat.”