Teen Vogue Markets Abortion As “Funny” And Exciting To Teens 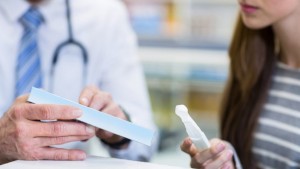 It’s a well-known fact Teen Vogue is enmeshed with the pro-abort crowd, but it’s worse than anyone ever thought.

Not only are they pro-abortion, their latest article actually talked about how to make abortion “fun”, and you won’t believe what sick group they’re promoting now. And if young teens continue to be subjected to this blatantly anti-life magazine, there’s no telling how much trauma they’ll come to find themselves in.

Teen Vogue is determined to make abortion sound “cool” to young teens. The left’s obsession with ending life is fierce, and it’s actually quite terrifying. And knowing that impressionable young teens all around the country are reading teen magazines, gives editors ammunition to make a political point.

The disgusting op-ed published in Teen Vogue discussed a group who calls themselves “Lady Parts Justice League”, which is composed of a group of pro-abort activists, who travel the country to promote abortion, and make it “fun.”

Teen Vogue reported: “For example: at counter protests, like the one we staged at the Northland Family Planning Clinic, LPJL shows just how brilliant of a pairing comedy and grassroots abortion activism can be.

The Lady Parts Justice League escalates clinic escorting by further drawing attention to themselves with big posters that distract from protesters’ anti-abortion posters. They directly engage with the protesters: asking them questions to expose logical fallacies, gleefully shouting back at their violent language, invoking their improvisation skills and natural wit to make jokes out of the situation.”

But as Mommy Underground previously reported, the abortion clinic is anything but “fun.” Pro-abort beasts like Planned Parenthood often treat women like an assembly line – ushering them in and out with no regard for the woman, or baby. 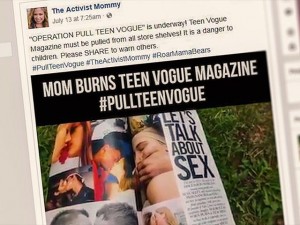 In fact, Planned Parenthood is so desperate to provide abortions, they often cover up sexual abuse, in order to proceed with the abortion. And while young sexual assault victims are facing trauma, Teen Vogue thinks abortion is “funny.”

Murdering an unborn baby is a horrific act. In fact, many post-abort moms later learn to regret their decision to end the lives of their unborn babies. The fact that Teen Vogue is attempting to sell abortion as “fun” and humorous, is downright disgusting and repulsive. Sadly, Teen Vogue has a history of promoting leftist ideas and peddling trashy stories.

Teens need to be taught they are more than their bodies, and the hyper-sexualization of young girls has got to stop.

So moms, be cautious on letting your teenage girl read a magazine off the shelves, and be sure to verify what information is being pushed to your daughter!