Tell Trump to Lift the FDA’s Ban on Raw Milk!

We were furious when Trump reversed Obama’s decisions to ban chlorpyrifos and block improvements to USDA Organic animal welfare standards.

But as long as he’s got his scissors out, there is at least one piece of “red tape” we wish Trump would cut: The U.S. Food & Drug Administration’s (FDA) ban on raw milk.

Why drink raw milk? There is plenty of scientific evidence of the nutritional superiority of raw milk, and its safety. But nothing tells the story of raw milk better than the testimonials of people whose health improved after they switched to raw milk. (Many of these raw milk success stories involve raw milk kefir, which you can make at home with certified organic kefir grains.)

In addition to modern testimonials, there are medical books written in the early 1900s with hundreds of case studies: “Milk Diet as a Remedy for Chronic Disease,” by Charles Sanford Porter, M.D. (1916) and “The Miracle of Milk: How to Use the Milk Diet Scientifically at Home,” by Bernarr Macfadden (1923).

Some of the illnesses that raw milk drinkers have experienced relief from include: 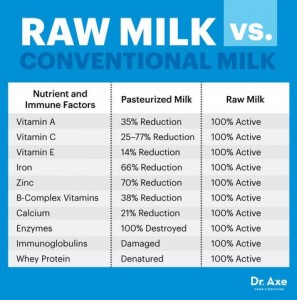 Raw milk may prove to be the key to understanding the “farm effect.” About half of Americans have evidence of allergic sensitization, which increases the risk of allergic disease. Yet only 7.2 percent of Amish children are sensitized to tree pollens and other allergens, making the Amish among the least allergic populations in the developed world. What could account for the difference?

In Europe, the consumption of unpasteurized milk also correlates with protection against allergic disease. European children who consume raw milk have more T-cells, which help the immune system restrain itself when facing substances that are not true threats. A healthy population of these and other “suppressor” cells is important in preventing allergies and asthma. The higher the quantity of those cells, the less likely is a diagnosis of asthma.

The “farm effect” seems to be a “raw milk effect” protecting children by favorably stimulating their immune systems, particularly early in life.

We think it’s high time the FDA acknowledge the health benefits of raw milk and start allowing raw milk dairy farmers to distribute unpasteurized milk in interstate commerce, as long as it bears a warning label and instructions for safe handling.