A century and a half later, British traders encountered a Cherokee town named Tanasi.  After the Revolutionary War, attempts were made to turn the area into the “State of Franklin” in honor of Ben Franklin. At the State’s Constitutional Convention, it is said General Andrew Jackson suggested the Indian name “Tennessee.”

In 1796, President George Washington signed Congress’ bill accepting Tennessee as the 16th State, which is significant as the Tennessee Constitution acknowledged God: “Article XI, Section III…All men have a natural and indefeasible right to worship Almighty God according to the dictates of their own consciences.”

“No person who denies the being of God, or a future state of rewards and punishments, shall hold any office in the civil department of this State.”  Evidently, acknowledging God was not a ‘religious test.’ 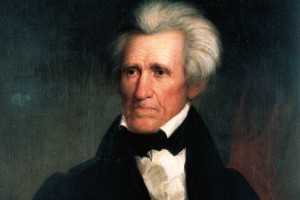 Considered the founder of the Democrat Party, Andrew Jackson was the only President to completely pay off the national debt, stating December 5, 1836: “The experience of other nations admonished us to hasten the extinguishment of the public debt… An improvident expenditure of money is the parent of profligacy…No people can hope to perpetuate their liberties who long acquiesce in a policy which taxes them for objects not necessary to the legitimate and real wants of their Government…”

Andrew Jackson continued: “To require the people to pay taxes to the Government merely that they may be paid back again…Nothing could be gained by it even if each individual who contributed a portion of the tax could receive back promptly the same portion…”

Jackson added: “Congress is only authorized to levy taxes ‘to pay the debts and provide for the common defense and general welfare of the United States.’

There is no such provision as would authorize Congress to collect together the property of the country, under the name of revenue, for the purpose of dividing it equally or unequally among the States or the people. Indeed, it is not probable that such an idea ever occurred to the States when they adopted the Constitution…There would soon be but one taxing power, and that vested in a body of men far removed from the people, in which the farming and mechanic interests would scarcely be represented…”

Jackson ended: “The States would gradually lose their purity as well as their independence; they would not dare to murmur at the proceedings of the General Government, lest they should lose their supplies; all would be merged in a practical consolidation, cemented by widespread corruption, which could only be eradicated by one of those bloody revolutions which occasionally overthrow the despotic systems of the Old World.”