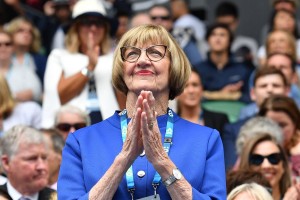 Unfortunately for Court, her name is being invoked for all the wrong reasons. Court decried homosexual marriage (which is currently illegal in Australia) and unleashed a torrent of criticism that could have a tangible effect on her legacy.

Several players have called for her name to be removed from the Australian Open stadium.

The topic has generated discussion at the French Open — including about whether the Australian Open stadium that honors Court should have its name changed. There was also talk about whether a protest of some sort could take place in connection with that Grand Slam tournament next year.

Court is an Australian who won a record 24 Grand Slam singles titles in the 1960s and 1970s and is now a Christian pastor. In a letter published in The West Australian newspaper, Court wrote that she would stop flying Qantas “where possible” because the Australian airline “has become an active promoter for same-sex marriage.”

“God made man for woman and woman for man to go and multiply the earth,” Court again told Sky News on Monday. “Well you know two men can’t multiply and two women can’t. … I think people should be able to say what they say.”

The 74-year-old Court has been a critic of homosexuality for decades.

Court said she did not deserve to have her name removed from the Australian Open stadium court. “I think that is very sad, it’s something I deserved,” Court told Sky News on Monday. “… I’ve earned those honors and accolades and awards.”

Samantha Stosur, an Australian who won the 2011 US Open, said: “I think everyone can have their opinion. I don’t agree with it. But I guess we’ll cross that bridge when we all get down to the Australian Open next year — and who wants to play on Margaret Court Arena and who doesn’t. And we’ll go from there.”

Asked about the prospect of players refusing to play in that stadium during the first Grand Slam tournament of 2018, Britain’s Murray said he thought it “would be a lot more beneficial to do it before the tournament starts.”

Murray added: “I would imagine a lot of the players would be pretty offended” by what Court said, “so we’ll see what happens.”

Madison Keys, an American player, said that she disagrees “100 percent” with Court’s comments.

“I kind of agree with maybe having the [Australian Open stadium’s] name changed and all of that. If that comes up, I’m sure there’s many people who would be for that,” Keys said after her win Tuesday. “It’s like, ‘Why can’t we just be nice to each other?’” Keys said. “So frustrating.”

“You can think, ‘Oh, I’m a boy,’ and it will affect your emotions and feelings and everything else. So, that’s all the devil — that’s what Hitler did and that’s what communism did: got the mind of the children. It’s a whole plot in our nation, and in the nations of the world, to get the minds of the children.”

Court is no stranger to controversial statements. In 1970, she made the following pro-apartheid comment: “…if you ask me, South Africa has the racial situation rather better organized than anyone else, certainly much better than the United States.”

Whether or not Court should have her name removed from the Australian Open stadium is part of a larger debate: should off-the-court beliefs supersede on-the-court excellence?

Court’s views haven’t been a secret, so on-the-court performance has won out thus far, but the current political sea change could swing the pendulum the other way.

It will be interesting to see how both players and Australian Open officials react when the next event rolls around in January.