(WNS)–In the least-watched debate so far this presidential primary season, Democratic candidates weighed in on the best way to respond to the Nov. 13 deadly attacks in Paris. Foreign policy took center stage in the contest at 9 p.m. the following night in Des Moines, Iowa, where 30 minutes of questioning focused on the attacks and unrest in the Middle East.

The matchup on CBS drew only 8.5 million viewers, about half as many as watched the first Democratic debate last month on CNN. Hillary Clinton cast herself as an experienced diplomat, while Sen. Bernie Sanders, I-Vt., blamed her leadership as secretary of state for contributing to the unrest in the Middle East. Sanders also criticized Clinton’s 2002 Senate vote for the war in Iraq for helping the rise of al-Qaeda and the Islamic State group, saying the decision to invade “unraveled the region completely.” 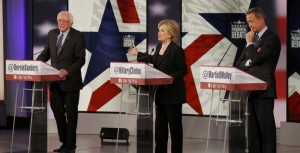 But neither candidate supported further U.S. military intervention against the Islamic State (ISIS or ISIL). Clinton said the war against ISIS, “cannot be an American fight,” though she added that American leadership is essential. Sanders agreed.

“The Muslim nations in the region—Saudi Arabia, Iran, Turkey, Jordan—they’re going to have to get their hands dirty, their boots on the ground. They are going have to take on ISIS. This is a war for the soul of Islam,” Sanders said. He also restated his belief that climate change remains the single greatest threat to America’s national security.

The Democratic contenders also debated economic issues. Clinton, Sanders and former Maryland Gov, Martin O’Malley tangled over how to pay for their plans to offer free college education, family leave and prescription drug coverage. All agreed taxes should go up on wealthy Americans and corporations.

And they all agreed the minimum wage should be raised. Sanders and O’Malley said the federal floor should be $15 an hour. But Hillary Clinton said a hike on that scale would be uncharted territory.

“If we went to $15, there are no international comparisons. That is why I support a $12 national federal minimum wage,” Clinton said.

The next Democratic debate will be held Dec. 19 in Manchester, N.H.