By Ryan Hill
(WNS)–On July 4, while Americans launched bottle rockets and grilled burgers to celebrate their liberty, a Chinese court fined Christian pastor Zhang Shaojie more than $16,000 and sentenced him to 12 years in prison for disturbing the public order. Local officials first detained him and more than 20 members of his state-sanctioned church in November.

Shaojie lost his liberty in a land where believers disappear into extrajudicial “black jails” and soldiers protect state employees who tear down crosses and demolish churches. But this week, his daughter found sanctuary at a church in Midland, Texas.

Zhang Huixin, along with her husband and 18-month-old daughter, landed Tuesday morning at the Midland airport, 330 miles west of Dallas. Members of the 3,000-person First Baptist Church Midland greeted the couple and child with songs at 10:30 a.m. as they stepped off the plane. In June, Chinese officials blocked the young parents from flying out of Beijing to the United States. With the help of ChinaAid, a Midland-based ministry, they fled the country through an underground network.

The week of her father’s first arrest, Huixin received anonymous phone calls from people threatening to wipe out her entire family, and local officials held her overnight for interrogation. In April, after an unsuccessful visa appointment, security guards at the U.S. Embassy in Beijing forced her and her infant from the building. 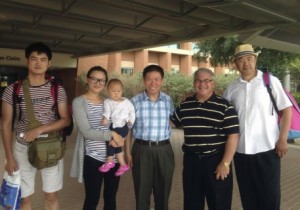 First Baptist moved Huixin and her family into one of the church’s guest homes, where they will stay as long as they need to, probably at least 6 months, said Pastor Randel Everett. They are sharing the space with a Chinese human rights lawyer who fled from China to Midland several weeks ago after defending Shaojie in court. Everett withheld the lawyer’s name to protect him, but said, “We call him Edward. … I actually had the privilege of baptizing him.”

In addition to taking English lessons, Edward has offered to help the church however possible. “I’ll even mop floors if you want me to,” he told Everett. His presence as a fellow countryman in the home with Huixin and her family will be a service of its own. For now, a language barrier may keep the couple from full participation in the First Baptist community, but Everett said the baby would enjoy the church preschool program.

God has a way of drawing persecuted Christians to Midland. Everett recently met an Ethiopian Christian, Getaneh M. Getaneh, who heads a Midland ministry that focuses on praying for oppressed followers of Jesus around the world. Getaneh suffered persecution decades ago at the hands of Ethiopian Communists, who hanged him upside-down and poured boiling oil over his body. Before reaching Midland, Bob Fu, president of ChinaAid, spent time in prison with his wife for leading a Chinese house church.

“For these two very prominent Christians who have escaped persecution to be living in Midland, Texas—it’s either an awfully strange coincidence or it’s just in God’s providence,” Everett said.

Next month, Everett will step down as First Baptist’s pastor to launch the Wilberforce Institute, a national network of churches committed to imitating Jesus’ ministry in Luke 4:18—good news for the poor, sight for the blind, freedom for prisoners and the oppressed.

“I never wanted to leave the security of a wonderful pastorate like here to start something new, and I’m almost 65 years of age, but it’s been a God thing,” he told WORLD. “It was one of those situations my wife and I couldn’t avoid. We either had to do this or we would be disobedient.”