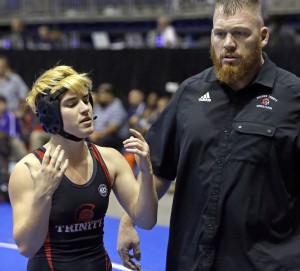 (WNS)–In “Lola,” the Kinks sing “Girls will be boys and boys will be girls, it’s a mixed-up, jumbled-up, shook-up world.” That’s certainly true in high school sports, where administrators have problems whether they classify athletes by the sex on their birth certificates or say they can be anything they want to be.

The legislative council of the University Interscholastic League (UIL), the governing body for public high school sports in Texas, will meet in June to discuss what to do with Mack Beggs, a transgender wrestler for a Fort Worth-area high school who is biologically female but identifies as male. Beggs won a state girls’ wrestling championship after chronicling, via social media, how she took testosterone for two years to transition to a more masculine body.

Testosterone increases muscle mass, strength, and aggressiveness in female athletes, giving them an unfair advantage over female opponents who do not take the hormone. Texas state law and the UIL prohibit female athletes from using testosterone, and penalize them with ineligibility if they are caught. An exception exists for testosterone that a medical practitioner prescribes and administers for a medical purpose defined as valid, such as gender transitioning.

Beggs wanted to wrestle against boys last year, but that was not an option: The UIL is one of just four state athletic associations that still uses the sex listed on an athlete’s birth certificate as the sole determining factor concerning whether the athlete must compete as a boy or a girl. But a lawsuit filed on behalf of a female wrestler who lost to Beggs may change that. The lawsuit seeks to compel the UIL to require Beggs—now a junior—to wrestle exclusively against boys, or not at all, during the 2017-18 season.

How the UIL can accommodate transgender athletes while ensuring athlete safety and fair competition remains a mystery. Other state athletic associations take a variety of approaches. In Oregon and Idaho, once a girl begins taking testosterone for transitioning purposes, she must compete as a boy for the remainder of her high school career. In Missouri, a girl who has undergone testosterone treatments cannot compete on a girls’ team without changing the team’s status to “mixed,” meaning the team can only compete for boys’ championships.

Other associations take a more relaxed approach. Alaska’s, for instance, honors individual school districts’ decisions concerning whether male athletes can compete as females, or vice versa, so long as the districts base such decisions on written, objective policies.