A federal judge in Texas has issued an order to block the Obama administration’s transgender mandate for public schools.

With school set to start in the next couple of weeks all around the country, a Texas federal judge’s order has changed a key policy many school districts were grudgingly preparing to enforce. 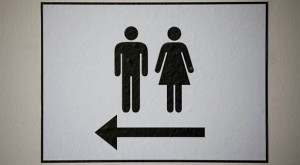 A sign points at the WC restrooms in Troisdorf near Bonn, western Germany. REUTERS/Wolfgang Rattay

U.S. public schools were instructed in May that transgender students must be allowed to use bathrooms and locker rooms consistent with their chosen gender identity just days after the Justice Department sued North Carolina over a state law that requires people to use public bathrooms that correspond with the sex on their birth certificate. U.S. Attorney General Loretta Lynch likened those policies to racial segregation.

“The information before the Court demonstrates Defendants have ‘drawn a line in the sand’ in that they have concluded Plaintiffs must abide by the Guidelines, without exception, or they are in breach of their … obligations,” O’Connor wrote, later adding, “This case presents the difficult issue of balancing the protection of students’ rights and that of personal privacy when using school bathrooms, locker rooms, showers, and other intimate facilities, while ensuring that no student is unnecessarily marginalized while attending school. The resolution of this difficult policy issue is not, however, the subject of this order.”

The judge’s order, which was date-stamped Sunday, was the direct result of a lawsuit filed by Texas and other states that sought to have the mandate repealed. Texas Attorney General Ken Paxton applauded the decision.

“This president is attempting to rewrite the laws enacted by the elected representatives of the people, and is threatening to take away federal funding from schools to force them to conform,” he said. “That cannot be allowed to continue, which is why we took action to protect states and school districts.”