The State of Texas is setting up a gold-backed bank that will allow depositors to bypass the controversial Federal Reserve System and its fiat currency in banking and commerce, according to the state representative who authored the recently enacted law. Under the measure, passed overwhelmingly by lawmakers and signed in mid-June by Republican Governor Greg Abbott, Lone Star State officials will establish and operate the Texas Bullion Depository for anyone who would like to deposit and trade in precious metals. The implications are as big as Texas.

While some analysts have said the move may be another sign heralding Texas’ eventual secession from the union, or preparation for financial Armageddon, its advocates say the depository simply makes financial sense. Among other benefits, the institution will provide more options to consumers weary of the increasingly troubled traditional banking and monetary system, which is viewed by the public with growing suspicion. And experts say the effect of making it easier to use sound money in commerce could be far-reaching.

Among other immediate effects, the law creating the first state-level gold-backed bank in the nation, House Bill 483, will involve repatriating about $1 billion of Texas gold from New York. Conflicting news reports and official statements say the state’s precious metals stockpile is being held either by HSBC in New York, or by the powerful New York Federal Reserve Bank, a privately owned outfit cloaked in secrecy with immense power over the U.S. economy. First, though, officials will need to select a home for the Texas depository.

“Today I signed HB 483 to provide a secure facility for the State of Texas, state agencies and Texas citizens to store gold bullion and other precious metals,” said a statement issued by Governor Abbott, a popular conservative governor, after the ceremonial signing. “With the passage of this bill, the Texas Bullion Depository will become the first state-level facility of its kind in the nation, increasing the security and stability of our gold reserves and keeping taxpayer funds from leaving Texas to pay for fees to store gold in facilities outside our state.” The law protects the assets from seizure by the feds or other forces, too.

There will be many other benefits as well, according to supporters. While other states have in recent years passed legislation declaring gold and silver to be legal tender, analysts say Texas’ new depository could help supercharge the growing movement for an honest and sensible monetary system founded on real money rather than debt-based paper notes conjured into existence by a private banking cartel. Indeed, one of the chief aims of gold-and-silver-as-currency proponents is to restore sound money — and the Texas law could help pave the way.

Tenth Amendment Center chief Michael Boldin, whose organization promotes states’ rights to rein in the feds under the 10th Amendment to the U.S. Constitution, called the law “an important first step towards gold and silver as commonly-used legal tender in the state.” He said the move has the potential to open the market to sound money, even in day-to-day transactions. “By making gold and silver available for regular, daily transactions by the general public, the new law has the potential for wide-reaching effect,” Boldin added.

The Tenth Amendment Center also highlighted the constitutional implications. Noting that Article I, Section 10, of the U.S. Constitution prohibits state governments from making anything other than gold and silver a tender in payment of debts, Boldin said the bill takes Texas a step toward fulfilling that long-ignored constitutional obligation. “Such a tactic would undermine the monopoly the Federal Reserve system by introducing competition into the monetary system,” he said. 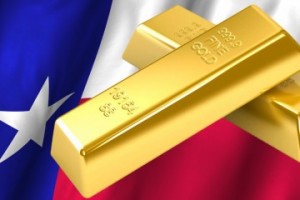 Other experts also highlighted those effects. “Over time, as residents of the state use both Federal Reserve notes and silver and gold coins, the fact that the coins hold their value more than Federal Reserve notes do will lead to a ‘reverse Gresham’s Law’ effect, where good money (gold and silver coins) will drive out bad money (Federal Reserve notes),” explained constitutional-tender expert William Greene in a paper for the market-oriented Ludwig von Mises Institute.

“As this happens, a cascade of events can begin to occur, including the flow of real wealth toward the state’s treasury, an influx of banking business from outside of the state — as people in other states carry out their desire to bank with sound money — and an eventual outcry against the use of Federal Reserve notes for any transactions,” added Greene, who also testified in favor of the law in his capacity as a private citizen.

The new law can also help protect depositors from other downsides of the present monetary regime — the risks inherent in fractional-reserve banking, for example — while still providing many of the conveniences associated with a bank account. Indeed, the depository will engage in many of the functions associated with traditional banking: The ability to store wealth for safe-keeping, the ability to write checks against deposits to transfer funds, and so on.

But in other respects, the institution will function very differently from a traditional bank. For instance, depository accounts will not pay interest, according to the law, nor will the deposits be loaned out to borrowers under the prevailing fractional-reserve banking regime. In an interview on the popular TruNews radio program, the state lawmaker behind the law celebrated the way in which the institution will operate as a major benefit for potential clients.

“This is different than your traditional bank — a traditional bank lends money,” said Texas Representative Giovanni Capriglione, who authored and sponsored the legislation. “Especially if you’re in Greece right now, you know that if you go to the bank, and everybody went to the bank to try to get their deposits out, there’s not enough paper money to cover it. That causes a whole bunch of concerns. What this depository does is, it doesn’t allow that — if there are 5,000 bars of gold in there, there will be 5,000 gold bars there, and you’ll be able to access your deposits directly upon demand.”

It will not be just Texas citizens, governments, agencies, and businesses taking advantage of the new options, either. “We are not talking Fort Knox,” Capriglione told the Star-Telegram newspaper. “But when I first announced this, I got so many emails and phone calls from people literally all over the world who said they want to store their gold … in a Texas depository. People have this image of Texas as big and powerful … so for a lot of people, this is exactly where they would want to go with their gold.”

Some conservative and liberty-minded activists expressed concerns about the law because it creates yet another state agency. However, writing in the market-oriented Ludwig von Mises Institute, economist Ryan McMaken argued that the benefits outweigh the downsides in this case. “While the Texas depository is a government-owned enterprise, it nevertheless is an improvement since it is a case of decentralization (and arguably nullification) which provides alternatives to the federally controlled monetary and banking systems,” he said. “As Hayek and other Austrians noted for decades, a decentralization of the monetary system is a key first step in moving toward more sound money.”

The depository will be run by an administrator appointed by the Texas Comptroller, whose office will oversee the institution. The chief of the Texas depository will have to be approved by various state executive and legislative officials. Any profits made will be handed to the general revenue fund, potentially benefiting taxpayers beyond the savings associated with repatriating the state’s gold. The full text of the law is available www.legis.state.tx.us.

A similar bill was introduced in 2013 but did not gain traction. This year, though, lawmakers approved it by a landslide margin, with 140 to 4 in the Texas House and 27 to 4 in the state Senate. Now, energized activists in other states are hoping to see similar measures across the country — with the ultimate goal of eventually restoring sound money and an honest economy free from the clutches of the Federal Reserve.