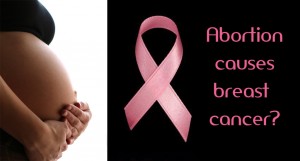 October is National Breast Cancer Awareness Month. According to the American Cancer Society, 1 in 8 women will develop invasive breast cancer over the course of her lifetime. But I doubt the mainstream media will even mention one easily-avoidable lifestyle choice that has been implicated as a risk factor in numerous studies around the world: abortion.

In my book, “The Sexual State: How Elite Ideologies Are Destroying Lives and Why the Church Was Right All Along,” I noted: “The link between abortion and breast cancer has been confirmed in numerous studies around the world, including Iran, China, Turkey, Armenia, India, and Bangladesh.” More recently, Drs. Angela Lanfranchi, Joel Brind and colleagues performed a meta-analysis of 20 studies of South Asian women, showing a correlation between breast cancer and abortion. Yet even the possibility of a connection between abortion and breast cancer will not be part of the month-long publicity campaign. Why?

The Sexual Revolution has created the Grand Sex Positive Narrative, to convince people that sexual activity is an entitlement for anyone capable of giving meaningful consent:

It’s as if they’re saying: “Oh, sure, casual sex used to present problems like risks of pregnancy and sexually transmitted diseases. But we modern, enlightened, technologically advance people have overcome all that. We have antibiotics to treat any stray microbes that manage to make it through the condom barriers we all use 100% of the time. We have pills and IUDs and long-acting reversible hormonal contraceptives to prevent pregnancy. And of course, we have safe, legal abortions to clean up any stray fetuses that manage to get conceived.”

The possible link between abortion and breast cancer presents a problem to the Grand Sex Positive Narrative. If abortion presents significant downsides, risks or problems, viewing casual sex as an entitlement would no longer make sense. Therefore, Sexual Revolutionaries have tried hard to convince people that abortion is no more psychologically traumatic or medically risky than removing an appendix or pulling a tooth.

Notice how strong this claim is. It can be refuted with a single counter-example. I don’t need to show that every woman everywhere regrets her abortion or was seriously harmed by it. All I need to show is that some women are harmed in some way. Once the idea of harmless abortion is dislodged from the public mind, then every woman must consider whether she could be one of the women likely to be harmed. Responsible medicine would require all health care personnel to take these risks seriously and provide full information.

Being overweight or having a family history of breast cancer are risk factors for breast cancer. Women in these situations might want to avoid abortion.

The Sexual Revolution is a fantasy ideology. We cannot build an entire society around the idea that sex and babies are completely disconnected. Yet many of our most intelligent, highly educated members of society are committed to precisely this goal. They can scarcely even consider evidence that some abortions are harmful to some women: it is just too upsetting, too disruptive to the Official Sex Positive Narrative.

That is why you have not heard anything about the connection between breast cancer and abortion, even during National Breast Cancer Awareness Month.

I’m not only willing to talk about it. I insist on it. Women’s health is too important to be threatened by political correctness.