The 1,300-year-old Apocalyptic Prophecy that Predicted a War Between an Islamic Army and ‘Infidel Horde’ in Syria and is Fueling ISIS’s Brutal Killers

An ancient prophecy romanticized by ISIS militants warns of a battle between an Islamic army and an ‘infidel horde’ in Syria which will herald the destruction of the world. The 1,300-year-old hadith, which is a report of the deeds, teachings and sayings of the Prophet Mohammed, refers to the ‘horde’ flying 80 banners as they take on a Muslim army in the Syrian town of Dabiq. It warns of a ‘malahim’ – the equivalent to Armageddon in Christian teachings – in which the Muslims ultimately prevail.

The prophecy is said to be a fundamental part of Islamic State’s ideology and is being used to fuel recruitment of jihadists who believe they are on the ‘cusp of history’. ISIS supporters on social media have started comparing recent developments in Syria to the prophecy amid warnings the ‘malahim’ is coming. 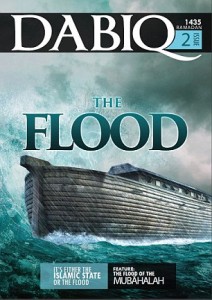 Islamic State fighters are said to have drawn on the prophecy even more so since conquering Dabiq in August and the town’s name has become a byword for the struggle against the West. The terrorist group has even named its official magazine ‘Dabiq’, in which it pushes its extremist views and reports victories.

Supporters appear to be convinced of the prophecy’s validity, with one writing on Twitter: ‘Dabiq will happen for certain.  ‘The U.S. and its allies will descend on Syria once they see that the air campaign has failed. That is a promise by God and his Messenger.’  Another, from Tunisia, wrote. ‘The lions of Islam have raised the banner of the Caliphate in Dabiq. Now they await the arrival of the Crusader army.’

Shadi Hamid, a fellow at the Brookings Institute, said the hadith is heavily relied upon by ISIS because it ‘raises morale’.  He said: ‘It is fair to assume that the vast majority of (ISIS) fighters believe in this type of talk.’

It comes as U.S.-led airstrikes continue in Kobani, where ISIS militants have been fighting with Kurdish forces to take hold.

In the wake of the ongoing conflict, President Barack Obama met with military commanders to discuss fears that airstrikes alone may not be enough to stop the fanatics. ‘As I’ve indicated from the start, this is not something that is going to be solved overnight,’ he said.

The ancient hadith has been passed down in different versions over the last 1,000 years but in all cases it has centered on a battle between a Muslim army and the forces of non-believers. Prophecy has played a role in the movement’s ideology since its early days as Al-Qaeda in Iraq under Abu Musab al-Zarqawi.

Before Zarqawi was killed in Iraq in a U.S. airstrike in 2006 and long before his movement evolved into ISIS he was already referring to the epic battle in Dabiq. ‘The spark has been ignited in Iraq, and its flames will grow until they burn the Crusader armies in Dabiq,’ he once said.