The 28th Annual ‘Just Pray NO!’ to Drugs Worldwide Weekend of Prayer and Fasting 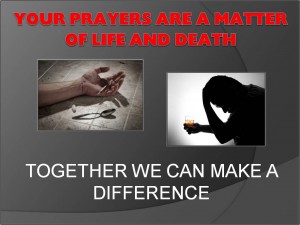 CLEARWATER, FL – The weekend of April 7- 8, 2018 has been designated as the 28th Annual “Just Pray NO!” to drugs Worldwide Weekend of Prayer and Fasting for the addicted and their families.

Since April 7th, 1991 “Just Pray NO!” has united Christians around the world in intercessory prayer on behalf of those bound by alcoholism, drug addiction and other life controlling compulsions.

Addiction in America is an ever increasing national crisis! Millions of Americans have addictions. 100 people die every day from overdoses. This rate has tripled in the past 20 years.

“Confess your trespasses to one another, and pray for one another, that you may be healed. The effective, fervent prayer of a righteous man avails much.” -James 5:16

Not only is substance abuse America’s number one health problem, the devastation of alcoholism and other drug addiction has impacted families and communities worldwide. Substance abuse has been directly linked to violence and sexual immorality and is a major source of income for organized crime and terrorist activities.

Make a formal commitment to join with believers in Christ from around the globe this coming April. Put on the full armor of God and fervently pray in spirit and in truth. We are seeking to enlist millions of prayer warriors from around the world to join us in battle!

“We are not only praying for the release of those bound by substance abuse but also for people to be delivered from pornography, gambling, obesity and smoking,” said Steven Sherman, “Just Pray NO!” founder. “We seek individuals and groups which are willing to commit to pray weekly on behalf of the addicted and their families, and then join with multitudes of other committed Christians from around the world in prayer and fasting April 7 – 8, 2018.”

If you believe that God is calling you to intercede for the addicted please contact us. To find help for addiction through prayer and Christian ministries log on to www.justprayno.org. To learn how groups can participate in our annual prayer event, click on “Information on the Annual Worldwide Weekend of Prayer” or email justprayno@aol.com or call (727) 647-6467.