Maybe you’ve read Pilgrim’s Progress, The Chronicles of Narnia and Lord of the Rings. If not, you’ve at least seen the movie greats, like The Ten Commandments, Chariots of Fire and The Passion of the Christ, right? But have you read, or seen, John Milton’s Paradise Lost – considered the greatest work of Christian literature of all time? 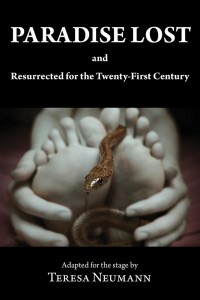 Probably not. And why? Because it’s a lengthy poem written in Old English.

Sure — since everyone’s heard of the title and the theme can be reduced to good vs. evil –there have been several secular attempts at re-inventing the story. Some have even thoroughly twisted Milton’s masterpiece to suit their own perverse agenda. But the fact is, John Milton’s masterpiece profoundly details God’s love, His creation of earth, Eden, and Adam and Eve, the Battle in Heaven, and His plan for salvation. Who knew?

Yet, to our great loss, this universal treasure has languished on dusty bookshelves. Until now.

In Paradise Lost and Resurrected for the 21st Century, author Teresa Neumann has adapted the classic into an unadulterated, short and easy-to-read format anyone can read. Truly a gift that will keep on giving, it is an immensely powerful personal read and is also perfect for book clubs.

Several performing companies and large universities have expressed a desire to produce it on stage, so buy it today and read it before it hits a theater near you – or, hopefully someday soon, the big screen!

As Boyd Tonkin, writing for The Spectator on March 18, 2017, said, “The whole gigantic yarn turns on a love story beyond the reach of Tolkien.”

Be stunned and inspired by this timeless epic — a story that has captured the hearts, souls and imaginations of millions for the last 350 years. It will change your life!

“My spirit leapt and groaned and leapt again as she retold this ancient truth in a manner that captivated my heart with love for my Creator and ignited a new level of hope for our future. Teresa Neumann was handcrafted by the Lord in her mother’s womb to re-sound a Message for all time.” Christine Potter, Potterhaus Music