The case of “Student A” is now drawing national attention

Students who are born with a gender but cognitively and emotionally identify with the opposite gender are identified as suffering from a condition called “Gender Dysphoria.” Treatment can consist of counseling with a psychologist. Other treatments may involve blocking puberty hormones, taking hormones to begin a gender change, or, in some cases, performing surgery to remove genitalia within sex-reassignment surgery.

The case of “Student A” is now drawing national attention. A civil rights violation complaint was filed within the Department of Education’s Office of Civil Rights against Township High School District 211, located in Palatine, Ill. The complaint alleges discrimination on the basis of sex by the school against the student for not allowing “Student A” to change in the girl’s locker room during PE and during swim class.

“Student A” was born a boy but identifies as a girl and has dressed as a girl since middle school. He underwent hormone therapy yet still has the genitalia of a boy, supposedly. The school district, according to the OCR’s own report, made several attempts to assist Student A with his desire to change without having to change in the boy’s locker room, a place where he understandably suffered ridicule and harassment. 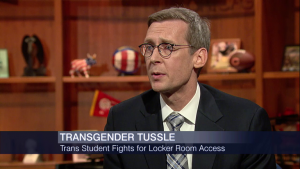 Student A is also a member of the girls’ basketball team. During the season, Student A was told that he could not change with the other female team members in the locker room because the girls on the team did not feel comfortable, and many parents had complained that they supposedly did not want a child with male genitalia showering, dressing, and undressing around their female children.

Despite the school and school district’s repeated attempts to satisfy the emotional needs of Student A, the child was not happy dressing privately away and apart from the females. The OCR opened a case and thoroughly investigated the complaint, even recommending that Student A be allowed to enter the female locker rooms and dress behind a curtain in a stall. The OCR added that if females wanted to maintain privacy, they should go change behind the curtains, although supposedly there are not enough curtains for all students in the large PE classes to privately change at the same time.

Thus, the Department of Education’s Office of Civil Rights was “in favor of the District granting Student A equal access to the girls’ locker rooms, while protecting the privacy of its students.” The school district refused to comply with the demands of the OCR. Now, because the district and the OCR are at an impasse, the district has been given an ultimatum: comply within 30 days or risk losing your federal funding under Title IX discrimination policies.

The conclusion of the OCR is as follows:

During its investigation, OCR interviewed Student A and her mother, toured her high school (School), interviewed District administrators and staff members, and reviewed documents provided on behalf of Student A and by the District. For the reasons set out below, OCR finds by a preponderance of the evidence that the District is in violation of Title IX for excluding Student A from participation in and denying her the benefits of its education program, providing services to her in a different manner, subjecting her to different rules of behavior, and subjecting her to different treatment on the basis of sex.

The decision to punish the school district seems to defy common sense and the OCR’s own policies of protecting students from rape and sexual violence. Outgoing Secretary of Education Arne Duncan’s own words seem to prove the point: “For far too long, the incentives to prevent and respond to sexual violence have gone in the wrong direction at schools and on college campuses…As interpreted and enforced by the department, Title IX and other federal laws are changing these incentives to put an end to rape-permissive cultures and campus cultures that tolerate sexual assault.” Putting male students in the locker room with female students appears to go against the OCR’s own claims that they are trying to put an end to rapes and sexual assault on school campuses.

If you were a parent of a female student at the school, would you want a transgender boy/girl to change clothes and shower around your daughter?