THE CRIME THAT WILL DESTROY AMERICA

Are the U.S. and NATO inciting Russia into war? 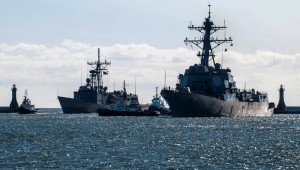 To thousands of objective experts, it does appear so. BALTOPS 16, a NATO military exercise, is now taking place in the Baltic Sea in very close proximity to Russia.

“Over the next three weeks BALTOPS 16 will draw together some 6,000 personnel, 45 warships, and 60 aircraft from 17 nations, including the United States, Germany, the U.K., the Netherlands, along with the littoral states of the Baltic States who are NATO members (Estonia, Latvia, Lithuania, Poland, Denmark) or NATO partners (Sweden and Finland).”

“Washington’s move to place a new ground-based missile defense system in Romania with Poland’s recruitment drive and the BALTOPS 16 exercise will surely raise tensions with Russia which are at an all-time high since the Cold War. Russia views this move as a threat to its security with NATO’s encirclement of Russia is as reckless and as dangerous as you can get in terms of escalating the possibility of a disastrous war.” 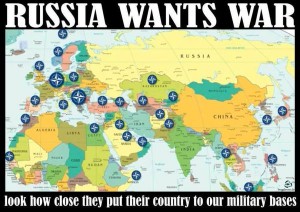 Imagine how the American people would react if Russia or China began putting missile systems on our northern and southern borders.

The report continues, “Russia is more than prepared to fight a war against NATO which would not last more than three days at best according to the Rand Corporation, a think tank based in Santa Monica, California. The Rand corporation employed well-known players in the political arena including war criminal Henry Kissinger as an advisor and George W. Bush-era Neocons such as Secretary of Defense Donald Rumsfeld (former Chairman of the board 1981-1986 and again in 1995-1996) and former Secretary of State Condoleezza Rice who was a former intern and trustee. The RAND corporation report admitted that a NATO war against Russia would last between 36 and 60 hours . . . .”

“If NATO were that foolish to start a war against Russia, European countries across Western Europe would be open to Russian missile strikes crippling Europe’s already fragile social and economic fabric. An attack on Russia would be the end of NATO, literally. Russia has capabilities that are far more advanced than what the U.S. and NATO forces have in their arsenal . . . .”

“The U.S. and its allies including Israel, Turkey and Saudi Arabia and other Gulf puppet states were all involved in creating the civil war in Syria in 2011 through a proxy opposition group to oust President Bashar al-Assad. The ‘protests’ were orchestrated by a covert operation led by US-NATO-Israeli intelligence agencies to create chaos in order to fault the Syrian government through propaganda. Washington and Israel want to destabilize Syria as a Nation State and break-up Syria into several small nation-states easier for the governments of the U.S. and Israel to control. Israel’s interest in destabilizing Syria goes back decades, perhaps as far back when the State of Israel was declared a new independent state in 1948.”

“For now, Washington . . . will continue to target smaller, weaker nations with their terrorists who they fund, train and manage in the Middle East and Africa. They will continue to destabilize governments through ‘regime change’ in Latin America as they recently did in Brazil and are in the process of targeting Venezuela, Ecuador and Bolivia through their Non-Government Organizations (NGOs) or controlled ‘opposition groups’ allied with Washington and Wall Street.”

“As for NATO forces on Russia’s borders, they would be destroyed in less than three days if they were foolish enough to follow Washington’s orders, then again Vassal states have no say in their own foreign or domestic affairs in the first place. NATO is a willing participant waiting for its annihilation as they sacrifice their lives and their nations in a war against Russia not for Europe, but for the American Empire.” 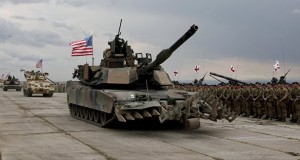 Former Assistant Secretary of the Treasury under Ronald Reagan, Paul Craig Roberts, was absolutely right when he said, “The crazed filth that controls US foreign policy is capable of defending US hegemony with nuclear weapons. The neoconservatives must be removed from power, arrested, and put on international trial for their horrendous war crimes before they defend their hegemony with Armageddon.

“Neoconservatives and their allies in the military/security complex make audacious use of false flag attacks. These evil people are capable of orchestrating a false flag attack that propels the US and Russia to war.”

Both major political parties in Washington, D.C., have brought the United States to the precipice of economic ruin. They have shredded the U.S. Constitution to the point that, for all intents and purposes, it does not even exist. Far too often, our court systems have failed to provide justice for the American people. Federal agencies such as the EPA and BLM have brought the American citizenry to a boiling point. The only thing that keeps the power establishment intact is their lying propaganda ministers in the mainstream media. But people by the millions (from both the left and the right) are seeing through the façade.

At some point, the only way the Neocons in Washington, D.C., and their crony monopolists (they are NOT capitalists) in New York City can keep their charade afloat is via a major war. War is the ultimate tool of globalists to enslave free societies. People will accept usurpations of their liberties during a time of war that they would NEVER accept otherwise. Plus, global war would provide the power establishment with the opportunity to create a new currency (no doubt a cashless system), wipe out national debt, and suspend constitutional law.

Is this what D.C. has planned for our near future: WAR? Think of the “national emergency” orders that could be executed by the President; think of the abridgments of the Bill of Rights; think of the entire American nation under “lockdown.” Not to mention the loss of multiplied thousands of innocent American lives in the process.

The United States has not tasted real war on its homeland since The War Between The States. For the most part, the American people have no idea what war is like. War is something that is fought “over there.” On the other hand, Russia has recent memories of the horrors of war and, in my mind, is showing great restraint against NATO’s encroachments and incitements. But Mr. Putin will only tolerate so much.

What the U.S. and NATO are doing in Eastern Europe is insane. To goad Vladimir Putin into war is the mark of desperate and despicably evil men. Then again, insanity and evil tend to go together. 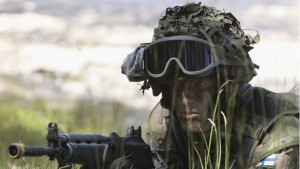 And for those of us who still believe in the importance of “Just War,” please remember that the greatest international crime that nations can commit is the Crime of Aggression. Nothing equals its condemnation under Natural Law. And right now it seems crystal clear that the U.S. and NATO are the aggressors, and therefore, if forced into war, Russia would be fighting a defensive, and thus, “Just War,” while the United States and NATO would be fighting an unjust war of aggression.

The American people had better turn off the sports channels long enough to pay attention to what is happening RIGHT NOW in Eastern Europe. It will be too late when nuclear missiles start landing in your backyard, folks.

And as is the case with every major failure within a nation, it is the pulpits that are the most culpable. For at least a half century or more, pastors have taught the American people almost NOTHING in regards to the fundamental principles of liberty, nations, and Natural Law. Think of it: in the State of South Carolina in which there are probably more professing Christians (and churches) per square mile than in any other State in the country, a reprobate Neocon warmonger such as Lindsey Graham (a 2016 Bilderberg participant, by the way) is the State’s senior senator.

Thanks to pastors and Christians who vote for people such as Lindsey Graham, the United States has been involved in myriad crimes of aggression all over the world for decades. That’s not an unpatriotic statement; that’s a factual statement.

When we turn a blind eye as our nation commits crimes against humanity in violation of both international law and Natural Law, we are NOT being patriotic. If that’s not the case, we owe the people of Nazi Germany a huge apology.

The leaders and people of Old Testament Israel thought God’s prophets were “unpatriotic” too. But they weren’t. Who loves their nation more: the ones who say nothing and let their country slide into human oppression and divine judgment or the ones who try to call their nation back to the side of human dignity and divine approbation?

Again, there is no worse crime for a nation to commit than the Crime of Aggression. 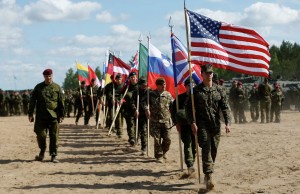 I can honestly say that in my entire life of being in church, I have NEVER heard a single pastor or minister say a word from the pulpit about the Crime of Aggression. Not one. Yet it is one of the most significant events in the life of King David. The only sin we ever hear about David committing is his adultery with Bathsheba. That was horrible, yes. And David paid a terrible personal price for that sin. But in terms of national impact, David’s intended Crime of Aggression was astronomically more jeopardous to Israel’s survival than his adultery. But I doubt that most Christians have ever even heard about it.

I tell you the truth: there is NOTHING more pertinent and relevant to America’s current crisis than the Crime of Aggression. Yet this is the crime that America seems to be the most addicted to, and this is the crime that pastors and Christians seem to be the least concerned about. I urge readers to watch my message DVD: “The Crime Of Aggression: Condemned By The Law Of Nature And Nature’s God.”

America has taken its crimes of aggression to weak and impotent nations that are mostly helpless to resist. But now America is taking its crimes of aggression to the doorstep of Russia–and is even beginning to do the same in China. If the American people do not soon rein in these rogue out-of-control Neocons and Neolibs running U.S. foreign policy, we will tragically discover that a nuclear Armageddon will soon be at our doorstep. And these Christians who think they are going to escape it are in for a rude awakening. Their indifference is helping to create this nuclear apocalypse, and their false prophecy theology will not save them from it. 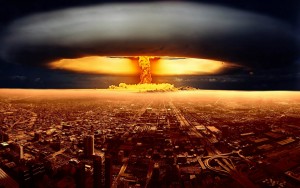 But if we all understood the divine principles of Natural Law that govern nations and began holding our civil magistrates accountable to these principles–and to our Constitution–we could indeed prevent what seems now to be inevitable.

Chuck Baldwin is a syndicated columnist, radio broadcaster, author, and pastor dedicated to preserving the historic principles upon which America was founded. He was the 2008 Presidential candidate for the Constitution Party. He and his wife, Connie, have 3 children and 9 grandchildren. Chuck and his family reside in the Flathead Valley of Montana. See Chuck’s complete bio here