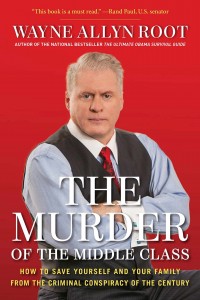 Famed actor and director Mel Gibson has written this script before. This is how the entire government and corrupt “powers that be” joined together in a massive conspiracy against Sir William Wallace in Braveheart, and against Jesus himself in The Passion of Christ.

It didn’t end well either time. Jesus and Sir Wallace spoke for the people. And the state fought back — hard and viciously. It’s happening again.

Donald Trump is certainly no Jesus Christ. He is certainly not perfect. Trump is flawed like any other human being. But he is nonetheless facing one of the most intense, over-the-top attacks ever seen in world history.

The people who want to control our lives are frightened to death of Trump. To them, Trump is dangerous. They’ve clearly decided something must be done about it. Here’s a partial list of the suspects…

– The top officials at the “Deep State:” the FBI, CIA and NSA. – The crooks and extortion artists running government agencies like the EPA, IRS and FDA. – The evil bureaucrats who let vets die at the VA (none of whom were ever fired). – The establishment GOP politicians like John McCain, Mitch McConnell and Paul Ryan. There are hundreds of them, bought and paid for by the lawyers, lobbyists, consultants and billion-dollar, multi-national corporations. – The big shots who run America’s media, many of whom are related to the big shots running our government and billion dollar corporations. – The DC establishment – lawyers, lobbyists, consultants and publicists – who all survive on government contracts. – Millions of federal government employees scared of losing power. – All of the organizations who make billions off government contracts, scams and “investments” like Obamacare, climate change and green energy. – And of course, Democratic politicians and strategists like President Obama, Hillary Clinton, Valerie Jarrett, Eric Holder, Jon Corzine and IRS Commissioner John Koskinen to name just a few on the left who have never been held accountable for their terrible and corrupt actions.

Trump threatens a whole lot of powerful people who have so much to lose. That’s why they are all frightened, paranoid and hysterical. Trump is threatening their corrupt game. He’s upsetting their apple cart. He’s derailing their gravy train.

They have to stop him at all costs. Not just stop him, destroy him. Lynch him. Crucify him. They need to send a clear message so no one ever tries to educate, enlighten or empower the masses ever again. That’s why the gates of hell have been opened on President Trump.

And I know why.

I wrote a book titled The Murder of the Middle Class about the unholy conspiracy between big government, big business and big media. They all benefit by the billions from this partnership and it’s in all their interests to protect one another. It’s one for all, and all for one.

It’s one heck of a filthy relationship that makes everyone filthy rich — everyone except the American people. We get ripped off. We’re the patsies. We’re the victims. The taxpayers are fleeced, defrauded and scammed every day.

Trump must be neutralized and silenced before people start to really believe they are the masters, not the servants.

Remember Trump’s great words only days ago at Liberty University, when he said, “In America we don’t worship government, we worship God.”

That’s one of the greatest lines in the history of the presidency. But those words were what cemented in the minds of the “DC powers-that-be” that Trump has to be stopped. The gates of hell opened up immediately after that speech went viral.

Those powerful words frightened all the corrupt and powerful people who are paid by government, not God. This isn’t just an old-fashioned “attack.” This is a coordinated Big Brother conspiracy to destroy Trump. This is a high-tech lynching. This is a crucifixion.

It’s not just the left. It’s also the GOP establishment, education establishment, government-funded scientists, media, CIA, NSA and pretty much every other government agency all united to stop Trump from turning off the spigot of magical, never-ending taxpayer money.

This is our last shot at saving America. If we don’t back Trump now, it’s all lost forever. It’s time to fight like it’s the end of freedom, the end of capitalism, the end of America. Because it is.

Either take a stand now, or forever remember the day you gave away your children’s and grandchildren’s freedoms and future. We must all stand together to stop the crucifixion of President Trump.