The danger of overeating: Too many calories cause fat cells to become ‘infected 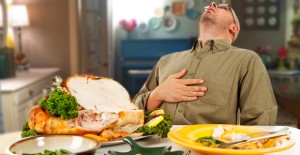 (NaturalHealth365) Do you have unwanted fat on your body? Unfortunately, it turns out that excess body fat doesn’t just sit there on your body and look ‘bad.’ Research clearly shows that fat cells can trigger an unhealthy inflammation response – especially in people who are prone to overeating.

Incidentally, you may already have heard that an excess of fat cells promotes cancer cell growth in people with obesity. It’s mainly due to the stress on the hormonal system. But, here’s what the new research is telling us.

Another reason why fat cells have such a negative affect on our health is what’s called the “immune-mediated inflammatory response.”

In a March 2013 issue of the peer-reviewed journal Cell Metabolism, researchers from The Methodist Hospital found that high calorie diets did far more than “just” cause an over-accumulation of fat cells (as if that isn’t problematic enough). It turns out, these excess and “overfed” fat cells actually stimulate an increase in the production of a group of proteins called major histocompatibility complex II (MHCII).

This is bad news, and we’ll talk about why in a second. First, let’s talk about how this happens: The standard American diet and lifestyle tends to be high in sugar, high (toxic) fat way of eating loaded with ’empty’ (worthless) calories – combined with an overall lack of physical activity. These excess nutrients are stored as body fat.

A WARNING about widespread inflammation and disease risk

MHCII proteins are normally involved in immune responses against viruses, bacteria, and other pathogens. In other words, they help launch a necessary inflammatory response that is required to help the body fight off infection.

The problem is, the mice and humans involved in the study mentioned were not under attack by any pathogens. But because these proteins were being produced by the excess fat cells, the immune system acted as if there was a pathogenic threat, thus triggering an inflammatory response.

What’s the takeaway? Fat cells – especially those caused by overeating – issue false alarm (stress) signals to the body by producing immune-mediated proteins. This effectively launches a widespread systemic inflammation – a type of inflammation which has been linked to major diseases including cancer, diabetes, dementia and depression.

In other words: the global public health crisis of obesity isn’t just about being fat and sick – but, rather, it’s about the fact that being fat can literally make you sick.

Your goal? Shed the excess pounds, keep those pounds off, and adopt a lifestyle that reduces inflammation. This way, you’ll be far more likely to avoid serious chronic health diseases and more likely to enjoy a lean (healthy) body weight.