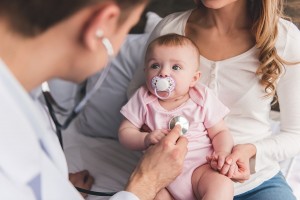 Our First “Well-Child” Visits with The Doctor

Dr. K. became our family pediatrician the day our daughter was born. I had a natural birth at the hospital, and he was on call that day and instantly won me over with his kind demeanor. He asked me if we wanted to give her the Hep B shot, and when I declined because she was not at risk of contracting a sexually transmitted disease, he completely respected my decision and went on with his rounds.

We visited him at two months and four months, and I was still a bit leery about what to do regarding vaccines. My daughter was so very healthy and up to that point hadn’t gotten as much as a sniffle. Our son, on the other hand, had been so sick his first year of life when we were vaccinating him, and although I still had not connected all of the dots to know that it was the vaccines that caused his illnesses, I knew deep down in my mommy gut that I couldn’t move forward just yet.

When the doctor asked if I was ready to vaccinate, I told him that I still wasn’t ready and didn’t have all of the information I needed. He kindly said not to worry and that I had until six months to decide. At that moment, I didn’t understand exactly what he meant by that. He then handed me a form to sign that said I was refusing to vaccinate my daughter and was thus risking her life. I tried my best to cross out certain parts and write in what I knew about the actual risks, then signed at the bottom as I was told.

The Day the Doctor Kicked Me Out

When her six month appointment came around, however, I began to get really nervous. I had just joined a natural parenting group and had begun to hear a couple of stories about vaccine injury. One of the group members shared this article online about a mother, who regretted not doing her research on vaccines prior to vaccinating her daughter, and she went on to develop autism as a result. I read it from start to finish just before I left for my baby’s appointment, and I knew that I just couldn’t go through with the vaccines.

I remember calling my husband nervously, though, not knowing what to do. I was so scared of making the wrong choice.

The doctor checked our daughter and although she had been completely healthy in every way and was exceeding all of her milestones, he commented that he was concerned about the size of her head. He showed me a chart with the normal measurements and noted that she was significantly off the bell curve. He feared that she could have hydrocephalus and wanted to do an MRI to rule out any complications.

I told him that I would need to discuss it further with my husband since general anesthesia was needed for the procedure. He agreed and then reminded me that today was her six month visit, and he needed to catch her up on her vaccines. I expressed my concerns to him, especially now with her head size being an issue, and told him that I just wasn’t ready to move forward with them just yet. I needed more time to make an educated decision and to make sure all was okay with her head.

It was then that he snapped.

According to him, my time was up, and I needed to do them NOW. He told me that he had warned me at my previous visit and that I no longer could postpone them if I wanted to continue bringing my daughter to him. I remember shaking uncontrollably, and almost said yes …

But I just couldn’t do it.

He kicked me out at that point and told me to go to the waiting room for the final paperwork. When I asked him about the concerns with the size of her head, he said that he would no longer take care of her as a patient until I decided to catch her up on ALL of her vaccines. He then slammed the door and left me to dress my baby, alone in the cold room.

I swallowed the large lump in my throat and with shaking hands dressed my baby and took her and her four-year-old brother out into the waiting room. The receptionist handed me a letter, signed by the doctor, telling me that we could no longer go back. I walked out as quickly as I could, buckled the children in their car seats, then cried all the way home. I was fearful for my daughter’s health concerning her head size; I was worried about what to do and where to go and whether or not I should have just listened to the doctor. I felt so very betrayed by him and yet somehow, felt so guilty for not following through with his demands. It was awful.

It’s been almost five years since that day, but the raw emotions that spilled forth on that long drive home are still fresh in my heart. Fortunately, after much prayer, we found an understanding pediatrician, who was willing to monitor my baby and make sure she was okay despite our hesitancy with the vaccinations. I praise God that after just a few months, her head size fell within range, and the need for further procedures were never warranted. Her health was also extraordinary, and she didn’t get her first cold until she was one year old! It was such a contrast to what we experienced with her brother and led me further into researching the safety and efficacy of vaccines.

What I’ve Learned Since that Day

I’ve come to learn after much labwork and tests that it was indeed the vaccines that caused my son’s delays and neurological issues. You can read his story here. I also learned that I wasn’t alone, and that there were many, many other parents with similar stories. It was ultimately their testimonies that kept me strong and helped me better research so that I could make more educated decisions concerning our daughters.

I also learned that the CDC recommended vaccine schedule has never been tested for safety. Not one study has ever been done, and yet, pharmaceutical companies are not liable for any type of injury or death associated with vaccines. This is why the recommended number of vaccines on the children’s schedule jumped so dramatically after 1986, when the law granting them immunity was passed. There was opportunity for profit without any type of accountability. It was never about the children.

In addition, I learned that pediatricians are awarded bonuses by insurance companies for every child they fully vaccinate. With one particular insurance company, for example, each fully vaccinated child earns the doctor a bonus of $400. The caveat, however, is that the bonus is only awarded if 63% of the children under two years of age are up to date for all recommended vaccines, including the flu shot.

It should have been obvious to me that Dr. K. did not have my daughter’s best interests in mind when he gave me only “six months” to decide. I had never once stated that I wouldn’t vaccinate her. I simply was not ready to on that day. Had he truly been concerned for her health and wellness, he would have continued providing care–at least until the head issue was resolved. I pray that his priorities have since changed.

There are so many other things I wish I had known on that day the doctor kicked me out.

I wish I had known that it was okay to say no.

I wish I had known that it was okay to ask questions.

I wish I had known that I didn’t have to decide what to do at “six months” or whatever arbitrary number my doctor had in mind. I could decide when and what to inject into my baby when I was ready and when she was fully healthy.

I wish I had known that I didn’t have to sign a self-incriminating form at any point during my previous visits. This was simply a bullying tactic that I did not have to succumb to.

I wish I had known that I didn’t have to conform to the recommendations of an industry that was more set on making a profit than on the safety of my children. I was the parent, and the choice was mine to make–not my doctor’s or the industry’s.

A doctor’s Hippocratic oath should always be “First, do no harm.” When a doctor is more concerned with reaching a certain vaccination quota rather than listening to the concerns of his patients, it is time to find a new one.

What You Can Do

Here are some tips to keep in mind should you ever find yourself in a similar predicament.

1.  Know that you are not alone. You, as the parent, have every right to determine what goes into your baby’s body. If you are unsure, you can always postpone until you have more information, so that you can have true informed consent. Click here for “10 Things Every Parent Should Know Before Vaccinating.”

2. Unless you are in California, West Virginia, or Mississippi, your child does not have to be “caught up” on vaccinations in order to attend school. You, as the parent, can file an exemption for any vaccine you choose not to administer. Click here for specific exemption information by state.

3. Do not let a doctor bully you into signing a form admitting neglect should you choose to waive one or more vaccines at a particular “well-child” visit. Click here for specific steps you may take in order to prepare research and documentation to support your choices. If your doctor still threatens you in any way, pull all medical files from their office and find another doctor.

4. If a doctor refuses care and inappropriately dismisses you as a patient or refuses to report an adverse reaction to a vaccine, you may file a complaint for medical negligence here.

5. Choose a doctor who has your best interests in mind. Here are “10 Things Every Doctor Should Know Before Injecting Your Child with a Vaccine.”

6. If a supportive pediatrician is unavailable in your area, consider visiting a general family practitioner, physician’s assistant, chiropractor, homeopath, or other holistic care provider. There is no law that says you have to go to a pediatrician for care. There are other options that may be a better fit for your family.

7. Stay informed and stand up for your right to choose what is best for you and your family. There is a lot of legislation working through the states right now that would force you to comply with the industry’s standards. Become a member of NVIC to receive updates on what is happening in your state or find an advocacy group in your area.

The day I was kicked out of my doctor’s office for not vaccinating my daughter, I had no idea what my rights were. I know now. And I want to make sure you know yours as well.