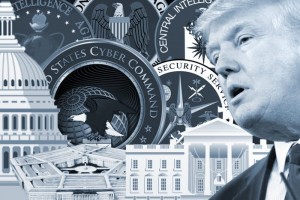 “Information Clearing House” – When Gen. Michael Flynn was forced to resign as national security adviser, Bill Kristol purred his satisfaction, “If it comes to it, prefer the deep state to the Trump state.” To Kristol, the permanent regime, not the elected president and his government, is the real defender and rightful repository of our liberties.

Yet it was this regime, the deep state, that carried out what Eli Lake of Bloomberg calls “The Political Assassination of Michael Flynn.” And what were Flynn’s offenses? In December, when Barack Obama expelled 35 Russian diplomats, Flynn spoke to the Russian ambassador. He apparently counseled the envoy not to overreact, saying a new team would be in place in a few weeks and would review U.S.-Russian relations. “That’s neither illegal nor improper,” writes Lake.

Vladimir Putin swiftly declared that there would be no reciprocal expulsions and U.S. diplomats and their families would be welcome at the Kremlin’s Christmas and New Year’s parties. Diplomatic crisis averted. “Great move … (by V. Putin),” tweeted Trump, “I always knew he was very smart.”

But apparently, this did not sit well with the deep state. For when Vice President Pence told a TV show that Flynn told him that sanctions did not come up in conversation with the Russian ambassador, a transcript of Flynn’s call was produced from recordings by intelligence agencies, and its contents leaked to The Washington Post. After seeing the transcript, the White House concluded that Flynn had misled Pence, mutual trust was gone, and Flynn must go. Like a good soldier, Flynn took the bullet.

The real crime here, however, is not that the incoming national security adviser spoke with a Russian diplomat seeking guidance on the future president’s thinking. The real crime is the criminal conspiracy inside the deep state to transcribe the private conversation of a U.S. citizen and leak it to press collaborators to destroy a political career. “This is what police states do,” writes Lake.

But the deep state is after larger game than General Flynn. It is out to bring down President Trump and abort any move to effect the sort of rapprochement with Russia that Ronald Reagan achieved. For the deep state is deeply committed to Cold War II. Hence, suddenly, we read reports of a Russian spy ship off the Connecticut, Delaware and Virginia coasts, of Russian jets buzzing a U.S. warship in the Black Sea, and Russian violations of Reagan’s INF treaty outlawing intermediate-range missiles in Europe.

Purpose: Stampede the White House into abandoning any idea of a detente with Russia. And it appears to be working. At a White House briefing Tuesday, Sean Spicer said, “President Trump has made it very clear that he expects the Russian government to … return Crimea.” Is the White House serious? Putin could no more survive returning Crimea to Ukraine than Bibi Netanyahu could survive giving East Jerusalem back to Jordan.

How does the deep state go about its work? We have seen a classic example with Flynn. The intelligence and investigative arms of the regime dig up dirt, and then move it to their Fourth Estate collaborators, who enjoy First Amendment immunity to get it out. For violating their oaths and breaking the law, bureaucratic saboteurs are hailed as “whistleblowers” while the journalists who receive the fruits of their felonies put in for Pulitzers.

Now if Russians hacked into the DNC and John Podesta’s computer during the campaign, and, more seriously, if Trump aides colluded in any such scheme, it should be investigated. But we should not stop there. Those in the FBI, Justice Department and intelligence agencies who were complicit in a conspiracy to leak the contents of Flynn’s private conversations in order to bring down the national security adviser should be exposed and prosecuted. An independent counsel should be appointed by the attorney general and a grand jury impaneled to investigate what Trump himself rightly calls “criminal” misconduct in the security agencies.

As for interfering in elections, how clean are our hands? Our own CIA has a storied history of interfering in elections. In the late ’40s, we shoveled cash into France and Italy after World War II to defeat the Communists who had been part of the wartime resistance to the Nazis and Fascists. And we succeeded. But we continued these practices after the Cold War ended. In this century, our National Endowment for Democracy, which dates to the Reagan era, has backed “color revolutions” and “regime change” in nations across what Russia regards as her “near abroad.”

NED’s continued existence appears a contradiction of Trump’s inaugural declaration: “We do not seek to impose our way of life on anyone.” The president and GOP should get out front here. Let Congress investigate Russia meddling in our election. And let a special prosecutor run down, root out, expose and indict those in the investigative and intel agencies who used their custody of America’s secrets, in collusion with press collaborators, to take down Trump appointees who are on their enemies lists. Then put NED down.