The Evil Empire Has The World In A Death Grip 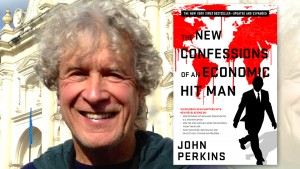 If you haven’t read John Perkins’ important book, Confessions of an Economic Hit Man, please put it on your list of must reads. An EHM is an operative who sells the leadership of a developing country on an economic plan or massive development project. The Hit Man convinces a country’s government that borrowing large sums of money from US financial institutions in order to finance the project will raise the country’s living standards. The borrower is assured that the project will increase Gross Domestic Product and tax revenues and that these increases will allow the loan to be repaid.

However, the plan is designed to over-estimate the benefits so that the indebted country cannot pay the principal and interest. As Perkins’ puts it, the plans are based on “distorted financial analyses, inflated projections, and rigged accounting,” and if the deception doesn’t work, “threats and bribes” are used to close the deal.

The next step in the deception is the appearance of the International Monetary Fund. The IMF tells the indebted country that the IMF will save its credit rating by lending the money with which to repay the country’s creditors. The IMF loan is not a form of aid. It merely replaces the country’s indebtedness to banks with indebtedness to the IMF.

To repay the IMF, the country has to accept an austerity plan and agree to sell national assets to private investors. Austerity means cuts in social pensions, social services, employment and wages, and the budget savings are used to repay the IMF. Privatization means selling oil, mineral and public infrastructure in order to repay the IMF. The deal usually imposes an agreement to vote with the US in the UN and to accept US military bases.
Occasionally a country’s leader refuses the plan or the austerity and privatization. If bribes don’t work, the US sends in the jackals—assassins who remove the obstacle to the looting process.

Perkins’ book caused a sensation. It showed that the United States’ attitude of helpfulness toward poorer countries was only a pretext for schemes to loot the countries. Perkins’ book sold more than a million copies and stayed on the New York Times bestseller list for 73 weeks.

Now the book has been reissued with the addition of 14 new chapters and a 30-page listing of Hit Man activity during the years 2004-2015.
Perkins shows that despite his revelations, the situation is worse than ever and has spread into the West itself. The populations of Ireland, Greece, Portugal, Spain, Italy, and the United States itself are now being looted by Hit Man activity.

Perkins’ book shows that the US is “exceptional” only in the unbridled violence it applies to others who get in its way. One of the new chapters tells the story of France-Albert Rene, president of Seychelles, who threatened to reveal the illegal and inhumane eviction of the residents of Diego Garcia by Britain and Washington so that the island could be converted into an air base from which Washington could bomb noncompliant countries in the Middle East, Asia, and Africa. Washington sent in a team of jackels to murder the president of Seychelles, but the assassins were foiled. All but one were captured, tried and sentenced to execution or prison, but a multi-million dollar bribe to Rene freed them. Rene got the message and became compliant.

In the original printing of his book, Perkins tells the stories of how jackals arranged airplane crashes to get rid of Panama’s non-compliant president, Omar Torrijos, and Ecuador’s non-compliant president, Jaime Roldos. When Rafael Correa became president of Ecuador, he refused to pay some of the illegitimate debts that had been piled on Ecuador, closed the United States’ largest military base in Latin America, forced the renegotiation of exploitative oil contracts, ordered the central bank to use funds deposited in US banks for domestic projects, and consistently opposed Washington’s hegemonic control over Latin America.

Correa had marked himself for overthrow or assassination. However, Washington had just overthrown in a military coup the democratically elected Honduran president, Manuel Zelaya, whose policies favored the people of Honduras over those of foreign interests. Concerned that two military coups in succession against reformist presidents would be noticed, to get rid of Correa the CIA turned to the Ecuadoran police. Led by a graduate of Washington’s School of the Americas, the police moved to overthrow Correa but were overpowered by the Ecuadoran military. However, Correa got the message. He reversed his policies toward American oil companies and announced that he would auction off huge blocks of Eucador’s rain forests to the oil companies. He closed down, Fundacion Pachamama, an organization with which a reformed Perkins was associated that worked to preserve Ecuador’s rain forests and indigenous populations. 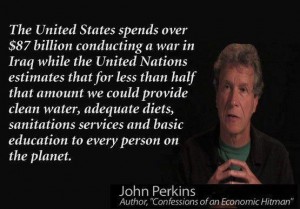 Western banks backed up by the World Bank are even worse looters than the oil and timber companies. Perkins writes: “Over the past three decades, sixty of the world’s poorest countries have paid $550 billion in principal and interest on loans of $540 billion, yet they still owe a whopping $523 billion on those same loans. The cost of servicing that debt is more than these countries spend on health or education and is twenty times the amount they receive annually in foreign aid. In addition, World Bank projects have brought untold suffering to some of the planet’s poorest people. In the past ten years alone, such projects have forced an estimated 3.4 million people out of their homes; the governments in these countries have beaten, tortured, and killed opponents of World Bank projects.”

Perkins describes how Boeing plundered Washington state taxpayers. Using lobbyists, bribes, and blackmail threats to move production facilities to another state, Boeing succeeded in having the Washington state legislature give the corporation a tax break that diverted $8.7 billion into Boeings’ coffers from health care, education and other social services. The massive subsidies legislated for the benefit of corporations are another form of rent extraction and Hit Man activity.

Perkins has a guilty conscience and still suffers from his role as a Hit Man for the evil empire, which has now turned to the plunder of American citizens. He has done everything he can to make amends, but he reports that the system of exploitation has multiplied many times and is now so commonplace that it no longer has to be hidden. Perkins writes:

“A major change is that this EHM system, today, is also at work in the United States and other economically developed countries. It is everywhere. And there are many more variations on each of these tools. There are hundreds of thousands more EHMs spread around the world. They have created a truly global empire. They are working in the open as well as in the shadows. This system has become so widely and deeply entrenched that it is the normal way of doing business and therefore is not alarming to most people.”

People have been so badly plundered by jobs offshoring and indebtedness that consumer demand cannot support profits. Consequently, capitalism has turned to exploiting the West itself. Faced with rising resistance, the EHM system has armed itself with “the PATRIOT Act, the militarization of police forces, a vast array of new surveillance technologies, the infiltration and sabotage of the Occupy movement, and the dramatic expansion of privatized prisons.” The democratic process has been subverted by the Supreme Court’s Citizens United ruling and other court decisions, by corporate-funded political action committees, and by organizations such as the 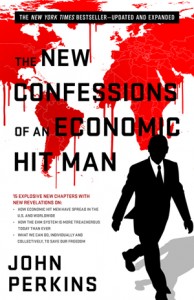 American Legislative Exchange Council financed by the One Percent. Cadres of lawyers, lobbyists, and strategists are hired to legalize corruption, and presstitutes work overtime to convince gullible Americans that elections are real and represent the workings of democracy.

In a February 19, 2016 article in OpEdNews, Matt Peppe reports that the American colony of Puerto Rico is being driven into the ground in order to satisfy foreign creditors.
The airport has been privatized, and the main highways have been privatized in a 40-year lease owned by a consortium formed by a Goldman Sachs infrastructure investment fund. Puerto Ricans now pay private corporations for the use of infrastructure that tax dollars built. Recently Puerto Rico’s sales tax was raised 64% to 11.5%. A sales tax increase is equivalent to a rise in inflation and results in a decline in real incomes.

Today the only difference between capitalism and gangsterism is that capitalism has succeeded in legalizing its gangsterism and, thus, can strike a harder bargain than can the Mafia. Perkins shows that the evil empire has the world in the grip of a “death economy.”

He concludes that “we need a revolution” in order “to bury the death economy and birth the life economy.” Don’t look to politicians, neoliberal economists, and presstitutes for any help.