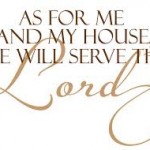 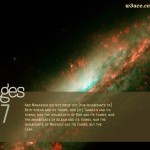 The road between faithfulness and apostasy is rarely direct. It’s not as though we walk in the light of God’s Word (1 John 1) for years and suddenly make a wrong turn and find ourselves lost in sin. Rather, in almost every case it’s the slight deviations from God’s prescribed path that end up putting us back on the broad road that leads to destruction. Consider Joshua 24. In this familiar chapter we see Joshua challenging the families to make a choice for themselves as to whom they would serve, whether the God who had delivered them countless times or the gods of the Egyptians or Canaanites. Joshua boldly proclaimed that he and his house would serve the Lord, and the people of Israel responded by saying that they would be right there with him, grounding their families in the law they had been given. So, everything was happily ever after and the people followed God for many years to come, right?

Although Joshua’s narrative ends there, Israel’s story is picked up in the same place at the beginning of Judges. Judges 2:7-10 tells us that Israel was faithful while Joshua was alive, but once that generation died out the next generation came along with no regard for God. The text immediately shows that they began worshiping the idols that their parents and Joshua had vowed to never serve. Those who had committed to training their families to serve the Lord had lost everything within one generation. But, as always, it didn’t just happen in the course of one day. Faithfulness doesn’t turn into apostasy on accident.

Backing up a few verses, we can start reading in Judges 1:27 about how the Israelites had gone into the land, conquered many cities, and then got comfortable. Instead of obeying God’s command to drive out all of the people in the land along with their idols, the Israelites allowed them to stay. One step is all it takes to find yourself on the road to apostasy. The idolaters lived, they kept practicing their idolatry, and they influenced the children of Israel to turn from God once their parents died. Those families could stand and claim their allegiance to God and their intentions to serve Him within their households, but God prescribed a course of discipleship (Deuteronomy 6) and if they didn’t follow it every day, their words would prove hollow and useless. Think of the messages they sent their children when they said they would follow God but ignored His command to remove all of the people from Canaan. They showed that God’s commands weren’t all that important. They showed that comfort was more important than obedience. They showed that they could pick and choose what they would follow. The messages were loud and clear, and their children followed suit.

That road between faithfulness and apostasy isn’t direct, but it is well mapped out for us. Looking at examples such as the Israelites, we can see the messages that our “little” compromises send. So, we have to ask ourselves, “What messages am I sending?” when we let our children choose sports or school over worship, class or personal Bible study time, or when we teach what the Bible says about loving people but constantly gossip, rip them, and ignore the parts about doing for others, or when we attend church on Sunday and sit through something like the Grammys, filled with immodesty and homosexuality… and the list goes on. It all starts with compromise. You’re either moving towards faithfulness or away from it. You’re either leading your family to strive to walk in the Light, or you’re showing them that it’s ok to make some compromises sometimes. Which road will you choose?