Israel’s Nuclear Hell Bomb and the Road to Global Armageddon 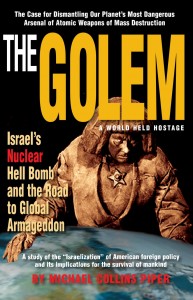 How Israel, the racist state that has the bomb, pushed the U.S. into the senseless war in Iraq and now demands the United States wage an insane war against Iran! The nuclear “Golem” is the bizarre and dangerous cornerstone of Israel’s national security policy. Development of a nuclear arsenal was the foundation of Israeli policy from the beginning. In The Golem, Michael Collins Piper examines not only the fanatical nature of this nuclear policy, but also the ongoing danger of political and civil instability in Israel where anti-Christian and anti-Muslim forces are rising to power. In Israel today the strange and frightening Talmud-based legend of the Golem remains a much-celebrated force in popular culture, inextricably linked to Israel’s national security mindset and thinking. You will find the whole incredible story in The Golem—exclusively from American Free Press.

A note from the author…

Just as this book was about to go to press, friends abroad advised me that I have been named to an official Israeli “Hall of Shame.”

This rather unusual “honor”—so to speak— was conferred by an Israeli state forum known as the Coordination Forum for Countering Antisemitism, which is co-sponsored by the office of the Israeli prime minister, Israel’s education and foreign ministries, and by such eminent global Jewish organizations as the Anti-Defamation League, the World Jewish Congress, B’nai B’rith, and the Jewish Agency, among others.

My “crime” was having attended—along with some 70 researchers and academics from 30 countries worldwide—a conference convened in Tehran in December of 2006 by Iranian President Mahmoud Ahmadenijad and the Iranian foreign ministry’s Institute for Political and International Studies.

Although the formal topic of this conference was the ubiquitous subject referred to as “The Holocaust,” the larger emphasis dealt with the ever-present problems stemming from Israel’s central role in the conflicts of the Middle East, in particular Israel’s treatment of the Christians and Muslims of Palestine—policies which are notably reminiscent of those said to have been practiced by Nazi Germany against the Jews of Europe.

Let me say with no hesitation that I consider this condemnation by Israel a badge of honor that I wear with pride: formal verification that I have devoted more than half my life to combatting senseless wars that America has been dragged into on behalf of Israel and the international Zionist agenda. I make no apologies whatsoever for having taken a forthright stand against Israel’s misdeeds and American global meddling on Israel’s behalf.

It is my firm belief that what I refer to as “The Problem of Israel” is one that threatens the very survival of life on Earth. it stands as the driving force behind the twin evils of war and imperialism—a very real two-headed dragon that must be slain. And that is why I have written this book. Israel’s nuclear weapons of mass destruction— its Golem—stand at the center of the problem and this problem must soon be resolved. Let us hope that this book helps make resolution of the problem possible.