The Greatest Romance Ever!

DONCASTER, UK (ANS) — Romantic novels have their place in enabling us to draw comfort and joy from a well-told happy-ever-after drama. But Romance of the Hebrew Calendar does much more than that.

In his meticulous way, South African-based author Raphael Ben Levi has shown us just what an immense treasure we have in the Hebrew scriptures, and in their fulfilment by Jesus (Yeshua HaMeshiach) – an eye-opener for Jews and a hugely enriching feast for Gentiles. 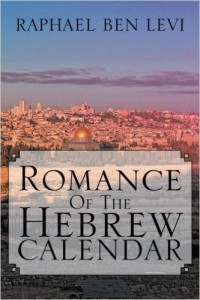 This is a beautiful book which will help light up our paths (Psalm 119.105) as we are led through the true meaning of the biblical feasts and much of the Bible’s teaching, while also gaining a better understanding of the trials and tribulations of the Jewish people through millennia, with commentary and stories from the Holocaust and other dark periods of their history.

But through it all they kept the Sabbath, they gave us the Bible and now its light has reached every corner of the globe. Composed by 40 different authors over thousands of years, it is nevertheless “an integrated message system”, he writes, quoting Dr Chuck Missler. “Every detail, every number, every place name and every allusion is there by careful design and is significant.”

In this respect he also quotes Richard Wurmbrand, a Jew who suffered years of torture for Christ in a Rumanian prison, explaining the significance even of the 153 fish the disciples caught after Jesus had instructed them to cast their net on the other side of the boat – the catch was a sign of grace, a word that occurs 153 times in the New Testament.

The point being made here, and throughout this wonderfully researched treasure trove of precious biblical jewels is that, as Wurmbrand put it, “every word in the Bible has a deep meaning. Nothing is superfluous.”

With a foreword by Richard Harvey, director of training at All Nations Christian College in the UK, the book also shines a light on the dark days of ‘Christianity’ responsible for spreading the lie that God’s promises to the Jews now apply only to Gentiles which in turn fanned the flames of anti-Semitism and made the chosen people understandably wary of Christian mission.

But it is also made perfectly clear that Jesus, the Jew, was the fulfilment of over 300 prophecies in the Jewish Tenakh (the Old Testament) – the author includes references to all of them – and still has a special place in his heart for his ‘brethren in the flesh’ as he waits with outstretched arms to welcome them back.

Raphael Ben Levi is the son of Holocaust escapees from Vienna. He was born and educated in the UK but later emigrated to Israel where he spent several years teaching. He is married, with one son, and now lives on the beautiful South Coast in KwaZulu-Natal, South Africa.

The book is available in hard or softcover as well as an e-Book at Amazon or Barnes & Noble.