The hyper-borking of Donald Trump 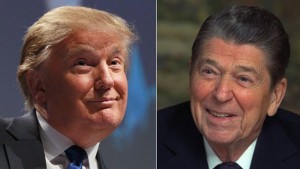 Borking: “to attack or defeat (a nominee or candidate for public office) unfairly through an organized campaign of harsh public criticism or vilification” (Merriam-Webster Dictionary).

At the peak of his presidential power, the populist conservative Ronald Reagan moved to solidify his legacy through the nomination of legal scholar Robert Bork to the United States Supreme Court. A staunch constitutional originalist and defender of natural law, Judge Bork represented the greatest threat to the global leftist elites since Reagan himself had snatched the GOP presidential nomination from their man George H.W. Bush. The globalist campaign to block Bork’s confirmation by the U.S. Senate through a massive blitzkreig of public vilification (i.e., “borking”) has ever since defined the phenomenon of “total war” in the political context.

While there have been numerous examples of candidate borking by the global elites since the Reagan years, none has surpassed the campaign against Robert Bork himself – until Donald Trump snatched the GOP presidential nomination from their man Jeb “low energy” Bush in 2016. Since then the vilification of Mr. Trump has reached at least two levels of magnitude higher on the political Richter Scale than the earthquake that toppled Bork, though Trump remains standing and retains a realistic chance of winning the presidency.

Trump’s astonishing survival in the face of unprecedented assault has struck terror into the hearts of the elites, as evidenced by their current level of desperation. Pat Buchanan correctly noted recently that “Big Media is the power that sustains the forces of globalism.” I will go further and say that Big Media is the Praetorian Guard of the New World Order whose greatest weapon against populist rebellion has been its pretense of neutrality in the fulfillment of its self-defined role as interpreter of reality for the public. Yet fear of a Trump victory (compounded by WikiLeaks’ daily release of evidence impeaching Clinton and her surrogates) has produced such frantic and open collusion with the Clinton campaign that Big Media has morphed into Big Hillary in full view of the American public and the world.

This all might seem like good news to populists and conservatives around the world if we focus only on the fact that the puppet masters are being exposed – but what is also exposed is the extent to which these dark-hearted elites crave power over the rest of us and a glimpse at the extremes they will go to preserve it.

The hyper-borking of Donald Trump has implications far beyond the American presidency. In my view it is evidence that the globalists have gone to DEFCON 1, and the next step could be actual war. It is not mere coincidence that America and British war drums are building an ever louder case for war with Russia in parallel with the Trump v. Clinton election. The ostensible rationale for their chest-beating is Syria, but I believe the real reason is Brexit, compounded by the shocking durability of the Trump candidacy and its emboldening of populists worldwide, portending a future total meltdown of globalist control under a Trump administration.

The last resort of the puppet masters is likely to be orchestrated global chaos, probably through war, economic collapse, or both, providing a justification for the implementation of police-state strategies and tactics. This was my prediction at a Christian conservative debriefing session in Central London the day after the Brexit vote, and I reiterate it today. Frankly, I think that result is virtually inevitable, regardless of who wins the presidency, because the genie of anti-globalist rebellion is now out of the bottle. What can we do about it? Keep fighting!

The all-important difference between the campaign to destroy Robert Bork and the campaign to destroy Donald Trump is that the people making the final decision are not the members of the U.S. Senate, but the American voters. Are we really going to allow the puppet masters and the corrupt leftist media manipulate us into letting Hillary Clinton have control of not just the White House, but the Supreme Court, the U.S. military, NATO and the United Nations? Are we going to vindicate the borking of Donald Trump by the same people who have destroyed so many Christian lives, careers and ministry efforts through the same despicable tactics? Are we really going to come this close to overthrowing the GOP establishment, the mainstream media, the European Union interlopers, the demons of the Democratic Party machine and the iron grip of the globalists and just surrender because (unlike you and me) Donald Trump has moral flaws?

Looking at the big picture, our choice is really not between Trump and Clinton. It is between freedom and slavery. As someone who himself has suffered more than my share of borking, I choose freedom.