By Marty Jean-Louis
ORLANDO, Fla. – The 2017 International Christian Film Festival, presented by 24 Flix, in Association with 4G Films is one of the fastest growing film festivals. The annual event that started as a small festival in Orlando Florida has become the largest Christian Film Festival in the world and is also the most respected. It has been called the Academy Awards for Christian Filmmakers. They have developed a very unique, classy, entertaining and professional event. In fact, they’ve brought some of top industry professionals including War Room Director Alex Kendrick, Stephen Baldwin, Ernie Hudson, and many more.

This year, attending the festival is PureFlix Co-Founder David A.R. White; you may also remember him from “God’s Not Dead.” Also attending is Actor TC Stalling whom you may remember from “War Room,” Former WWE Wrester Shawn Michaels will also be in attendance among many of the best Directors, Producers, Actors and Industry Professionals. 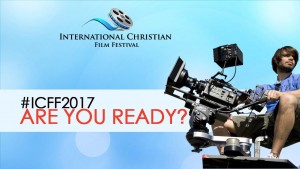 “We are extremely excited to be celebrating 5 years. We believe that God is truly the Director of the Festival and He is guiding us every step of the way. I look forward to meeting a lot of new festival attendees and as well many friends who I’ve made at the festival over the years,” Founder and Festival Director Marty Jean-Louis said in a recent interview.

They have certainly set a high standard in film festivals. They are the only Christian Film Festival that has a screening in France each year during the Cannes Film Festival where festivalgoers have an option to watch Christian Films that have been nominated at ICFF. This year a record 503 Films were submitted from over 40 different countries. In fact, over 2500 people from Europe, Asia, Africa, South America, The Caribbean and all over the United States are expected to attend this year’s festivities. “We can’t wait; we simply can’t wait. Our team has been preparing for this ever since the last festival ended last year. We are ready and we are pumped” Christopher Cuff, Producer of the Festival said.

There are so many exciting things to do at ICFF including the opening night reception, the opening night movies, the seminars, the red carpet, and of course the Oscar style award ceremony. One major advantage is to watch some of the movies ahead of the official theatrical release. “This is the best film festival that I’ve ever attended and I’ve been to all of them,” Isaac Hernandez from Parables TV said.

This year’s red carpet will be broadcast live on TATV. They also partnered with the festival this year to broadcast the award ceremony at a later date. You may see it at www.mytatv.com, Via the Apple & Android apps, Roku, Orlando Channel 38.2, and Miami Channel 11.2.

For additional information please visit the festival website at www.internationalcff.com