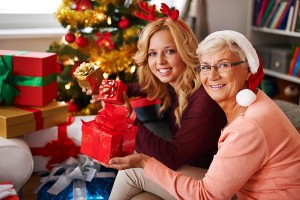 One Christian grandma was eager to celebrate the Christmas spirit, so at a local Christmas market she decided to read a story telling others the real meaning of Christmas – the birth of Jesus Christ. But one liberal city wasn’t having it, so they set their sights on shutting down this sweet old grandma.

The actions of city officials sent shockwaves to the church leaders who were with the grandma at the Christmas market. This local church participated in the Christmas market by singing songs and then using the time in between hymns to talk about Jesus. But this year when the little sweet old grandma stepped up to read about the birth of Christ, organizers of the event shut off her mic.

When the Pastor of the church used his mic to begin talking about Jesus, they silenced his mic too. And once city officials succeeded in silencing the name of Christ, they snickered in victory.

“After a choir sang traditional carols and a hymn, the woman stepped forward to read the Christmas story from the German translation of the Gospel according to Luke. She was interrupted when people associated with the festival turned off her microphone and played elevator music to drown out her voice.

City staff then told the woman that there could be no scripture reading during the festival. When Pastor Jacob Reaume began to tell festival-goers about the Christ Child and why He came into the world, his microphone was turned off, too.”

What a sad day when the name of Jesus is not allowed to be uttered in public. With all the depravity of society, reading the story at Christmastime on the birth of Christ should be a breath of fresh air. But liberals are determined to continue the war on Christmas.

“If the Christmas message is not welcomed in the public square at Christmas time during a Christmas festival … I mean, that would certainly be a major shame and a disappointment if that’s where we’ve come to as a society,” Reaume said.

The double standard our society is facing is striking. LGBT activists can parade around in the streets and promote “transgenderism” to children, but a Christian grandma can’t discuss the birth of Christ. The war on Christmas and Christians isn’t hype, it’s real.

The sweet old Christian grandma may have been silenced, but we are not ashamed of the Gospel, and below you’ll read the words this grandma was not allowed to speak.

The Birth of Jesus Christ

“ In those days a decree went out from Caesar Augustus that all the world should be registered. This was the first registration when Quirinius was governor of Syria. And all went to be registered, each to his own town. And Joseph also went up from Galilee, from the town of Nazareth, to Judea, to the city of David, which is called Bethlehem, because he was of the house and lineage of David, to be registered with Mary, his betrothed, who was with child. And while they were there, the time came for her to give birth. And she gave birth to her firstborn son and wrapped him in swaddling cloths and laid him in a manger, because there was no place for them in the inn.

And in the same region there were shepherds out in the field, keeping watch over their flock by night. And an angel of the Lord appeared to them, and the glory of the Lord shone around them, and they were filled with great fear. And the angel said to them, “Fear not, for behold, I bring you good news of great joy that will be for all the people. For unto you is born this day in the city of David a Savior, who is Christ the Lord. And this will be a sign for you: you will find a baby wrapped in swaddling cloths and lying in a manger.” And suddenly there was with the angel a multitude of the heavenly host praising God and saying,

“Glory to God in the highest, and on earth peace among those with whom he is pleased!”

When the angels went away from them into heaven, the shepherds said to one another, “Let us go over to Bethlehem and see this thing that has happened, which the Lord has made known to us.” And they went with haste and found Mary and Joseph, and the baby lying in a manger. And when they saw it, they made known the saying that had been told them concerning this child. And all who heard it wondered at what the shepherds told them. But Mary treasured up all these things, pondering them in her heart. And the shepherds returned, glorifying and praising God for all they had heard and seen, as it had been told them.” Luke 2: 1-20