The Long Gray Line, The Long Red Line and the Freedom Documents 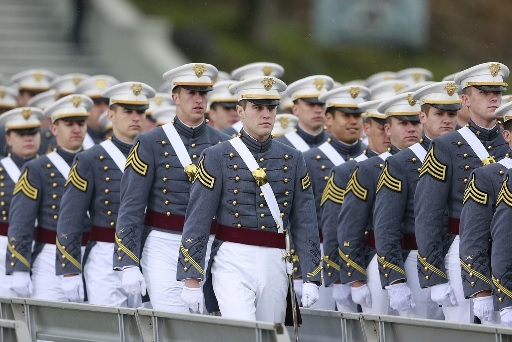 The Long Gray Line is the assembly of graduates of the United States Military Academy at West Point. The Long Red Line is the trail of blood resting beneath the soil of this country, deposited by America’s Patriots.

A few days ago, “Concerned Graduates of West Point” wrote and signed a Declaration of Betrayal of West Point for Academy leadership.

Here is a portion of what they wrote:

The Long Gray Line is the assembly of graduates of the United States Military Academy. It serves as a fount of American battle tested experience, the institutional memory of the Military Academy, and the watchdog of the United States Corps of Cadets. As such, it is the sacred duty of the Long Gray Line to challenge dysfunctional conduct or rogue behavior, such as that which has come to dominate West Point.

We, the members of the Long Gray Line, have observed a rejection of adherence to the ancient principles of the Military Academy. These changes threaten the mission of the Academy. It appears that the Honor Code is no longer enforced as it has been historically and has been allowed to fall into disarray. 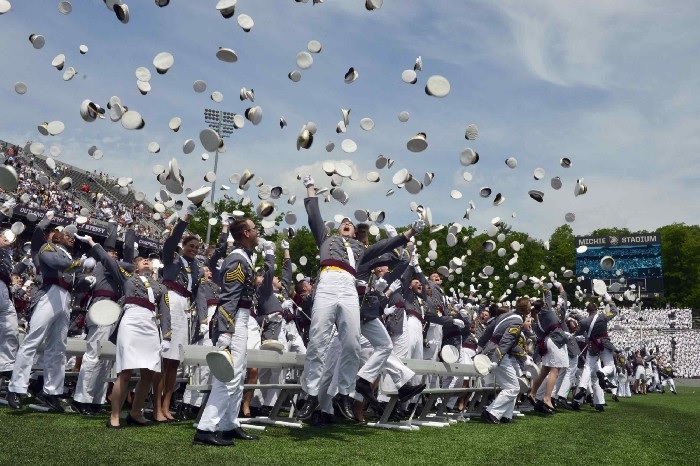 We hold the belief that the work of the founders has produced a nation like no other. The constitutional order of the Republic rests upon fundamental principles that are unique to the United States of America. Our constitutions, State and Federal, are the most wonderfully designed documents that create an adhesive, cohesive, just, and peaceful means of life ever known by humanity. Our founders started this country that was born of revolution according to our universally appreciated laws of our Creator.

We have a beautiful system that has been corrupted and abused by people with no moral foundation. Our country was born of God’s inspiration and without God as the ultimate power and place for redress, no government can operate to serve their constituents. We need not look for a new system, we need only to restore the original constitution, which provided for States to have the primary authority and most power under their own constitutions designed to accommodate their local cultural norms, yet all of which are dependent on and arise from God’s laws.

Leftist ideologues are trying to replace personal responsibility, self- reliance, and initiative with the entitlement mentality. They are working hard to transform the Constitution into a document that can be continually revised to accommodate the latest socio-cultural trends. They have made substantial progress in replacing freedom of religion with freedom from religion. Leftists prefer anarchy to law and order as can be seen in their nationwide effort to defund police departments, adopt identity politics and tribalism to replace E Pluribus Unum, and institute moral relativism to replace Biblical morality.

It is for times like these that God made Patriots. This is no time for summer soldiers and sunshine patriots. Those who have stood in harm’s way are needed now to stand by our oath. It is time to speak truth to power. We either serve Duty, Honor, Country, or we challenge the demands of a secular revolution to fundamentally alter America transforming the Republic into a socialist police state.

Wow! What a declaration!

My life’s calling is preaching and teaching Truth for God and Country. This passion was the impetus for the creation of my radio talk show, Liberty Fellowship and this column.

It was also the impetus for the formation of the greatest compilation of America’s most important historical documents in one volume under one title that we call THE FREEDOM DOCUMENTS—the REAL story of America’s Long Red Line—documents containing the ideals to which the declaration from the Long Gray Line above refers.

We began offering the very popular FREEDOM DOCUMENTS 20 years ago, in which we compiled dozens of the greatest documents of American history in one beautiful volume. I say beautiful, because the cover on this great book will complement any library, dining room table or nightstand.

This volume of documents is an almost perfect compilation of the most important documents of liberty and constitutional government ever produced. And it is available ONLY through Liberty Fellowship. 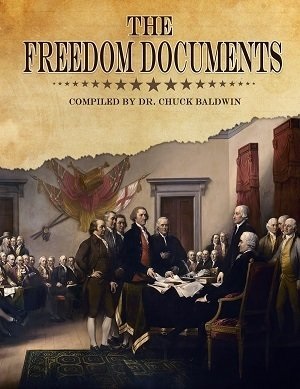 This Expanded Edition of THE FREEDOM DOCUMENTS includes such documents as:

*The Earliest Formal Protest Against Slavery *New York Sons Of Liberty Resolutions On Tea *Dr. Joseph Warren’s Account Of The Battle Of Lexington *Of Monarchy And Hereditary Succession, From “Common Sense,” By Thomas Paine *Richard Henry Lee’s Resolution For Independence *The Kentucky And Virginia Resolutions Of 1798 *Andrew Jackson’s Veto Of The Bank Bill *Declaration Of The People Of Texas *Abortion And The Conscience Of The Nation, By Ronald Reagan *Ron Paul’s Farewell To Congress

Documents such as these are also included:

*The Mayflower Compact *The First Thanksgiving Proclamation *The Rights Of The Colonists, A List Of Violations Of Rights, And A Letter Of Correspondence By Samuel Adams *The Complete Text of Patrick Henry’s Immortal “Give Me Liberty, Or Give Me Death” Speech *The Declaration Of The Causes And Necessity Of Taking Up Arms *The Northwest Ordinance Of 1787 *The Virginia Bill Of Rights *The Articles Of Confederation *George Washington’s Farewell Address *Texas Declaration Of Independence and many more.

The poem about Paul Revere’s ride and the letter written from within the Alamo by William Barret Travis to the people of Texas are also in the book, along with, of course, the Declaration of Independence, U.S. Constitution and Bill of Rights. We have also expanded the number of letters written between John and Abigail Adams and the prayers of George Washington—along with many others.

Again, there are a total of 57 of the most important liberty documents in U.S. history included in this giant compilation. The Expanded Edition of THE FREEDOM DOCUMENTS also includes many new introductions. The introductions by themselves are a great history lesson.

THE FREEDOM DOCUMENTS is assembled with a ring spine for easy copying. Now, more than ever, these historic documents contain the Spirit and Pride of America. This giant book is an excellent resource for high school and college students—as well as homeschoolers. Pastors, teachers, physicians, business owners, attorneys and judges have purchased THE FREEDOM DOCUMENTS with extreme satisfaction.

The Tennessee State Supreme Court also ordered several copies of THE FREEDOM DOCUMENTS. Plus, a county sheriff in Montana ordered copies for each of his deputies. I believe you will be just as pleased as they are with this wonderful compilation of American documents.

You can have these great documents at your fingertips in one beautifully bound, easy-to-read format. These are the documents that gave birth to the greatest free nation on earth. Again, nowhere else can you find these documents complete in one volume under one title.

This compilation of documents is only available here. And our supply is very limited and will not last long. The price is $39 for a single copy or $29 each if you purchase two or more, plus $10 shipping for each book. The shipping costs quoted are only for domestic orders; international rates vary.

Remember, this is a BIG book. Simply mail your check or money order to:

Former Constitution Party founder and presidential candidate, the late Howard Phillips, said, THE FREEDOM DOCUMENTS is must-reading for every American. It is essential that this volume be placed in every home in the country. I read my copy daily. We require our homeschooled children to study THE FREEDOM DOCUMENTS.

Here are some other personal testimonials of people who have purchased THE FREEDOM DOCUMENTS:

ND, Englewood, Florida: I already have a copy but my husband just ordered 2 copies to give to 2 business leaders and I am giving one to a friend and one to a pastor. Thank you for this magnificent compilation.

CL, Montana: These documents are awesome! When I purchased this Treasure trove of American History, I made sure it holds a safe and honored place in my library! No one else has taken the time to catalogue these documents in one easy to reference collection. Thank you, Pastor Chuck!

AM, Central Texas: I am very glad to have bought 3 of the Freedom Documents books for my sons ages 44, 41, and 35 and their families to refer to for the rest of their lives.

LB, Columbus, Ohio: Thank you for assembling the most precious history of our country!

EF, Pensacola, Florida: I LOVE your FREEDOM DOCUMENTS book! It was the ‘text’ for educating my children in the documents essential to understanding what made this nation exceptional. Keep up the good work in publishing this. Please send me five additional copies.

KT, Massachusetts: I have begun reading through my copy of THE FREEDOM DOCUMENTS. I must admit, I was somewhat skeptical of the price before purchase, but now that I am reading it, I understand what a bargain it is! Priceless!

SO, Ocala, Florida: I am a deacon in our church and hope to use these books as teaching aids. Please send four copies.

I believe you will be just as pleased to receive your copy of THE FREEDOM DOCUMENTS as were these folks.

Notice how many people are ordering THE FREEDOM DOCUMENTS for their children and grandchildren. This is for good reason. We know the public schools stopped educating students regarding real American history decades ago. And sadly, most private, parochial and Christian schools do not teach much U.S. history either—especially when it comes to the content of these great documents.

The unfortunate reality is, if most young people do not obtain THE FREEDOM DOCUMENTS, they will grow into adulthood having never read the vast majority of these wonderful historical documents. I remember being required to study some of these great documents in public school when I was a youngster. But those days are long gone.

More than one person has told me that once they started reading THE FREEDOM DOCUMENTS, they could not stop. They have told me that as they read these great documents, the feeling of national pride swelled in their hearts like never before. These documents will truly inspire (or re-inspire) the great feeling of American patriotism like little else will.

And why not? These are the documents that came from the minds and hearts of the great men and women who birthed and built this wonderful country. I am sure that the Spirit of ’76 will swell in your heart, too, as you read THE FREEDOM DOCUMENTS.

If Joe Biden and his gaggle of anti-America, anti-Constitution, and anti-freedom globalists have their way, it won’t be long and THE FREEDOM DOCUMENTS could be the only place left where you can read the truth of America’s history from the ones who made it.

Remember, this is a special, limited Independence Day printing and will not last long. So, order now! One more time, visit https://chuckbaldwinlive.com to learn more about or to order the Expanded Edition of THE FREEDOM DOCUMENTS.