THE LOST HISTORY OF ANCIENT AMERICA

By John Tiffany of The Barnes Review 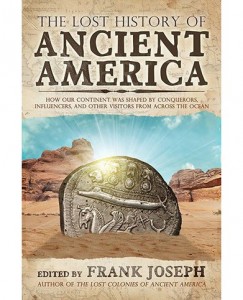 The Lost History of Ancient America presents new evidence of transoceanic visitors to old America, hundreds—even thousands—of years before Christopher Columbus was born. Its eminent scholar-contributors are experts in a variety of fields, from botany, biology, and prehistoric engineering to underwater archeology, archeo-astronomy and Bronze Age warfare.

In ancient times, the sea was not an impassable barrier separating our ancestors from the outside world, but a highway taking them to every corner of it. Never before and nowhere else has so much evidence proving the impact made on America by overseas visitors been assembled. Here is irrefutable proof that the Americas were, indeed, influenced by fearless visitors from across the oceans long before even the Vikings went in search of new lands to settle.

The Lost History of Ancient America ends the debate between cultural diffusionists—who have always known that our ancient ancestors did not consider the sea an impassable barrier—and cultural isolationists, who have been equally certain that humans lacked the know-how and courage for global navigation until a little more than 500 years ago.

“In The Lost History of Ancient America, author Frank Joseph compiles a plethora of informative articles and documents about the growing evidence of peoples from across the globe visiting and living in America LONG before Columbus ever boarded his first ship.”—Bruce Cunningham, publisher, Advanced Archaeology