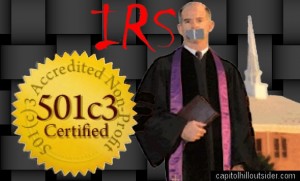 Fake news is all of the rage in America today.  If the Truth be told there are a lot of “fake” things that we believe.  In fact, many of the problems we face today come from believing things that simply are not true.

That’s right, my friends.  Dishonesty is ruling the day.

Most of us comply with the lies because it simply makes our life easier. Calling out the dishonest is not a very comfortable activity, especially if you are prone to going along to get along.

Well, I like getting along with people but not so much that I will compromise what I believe simply for sake of keeping the peace.  Lies need to be challenged.  Unfortunately, most Christians are either to cowardly or too deceived to make waves.

Consider the current state of “corporate churches” in America.  A corporate church is one who has entered into a partnership with the government in order to claim donations as tax exempt.  In a great example of miss-education most pastors and church planters have fallen into the trap of incorporating their church.  This business incorporation invites the government into the board room of the American church.

The 501 (c)(3) incorporation has done more to silence the mouth of God than anything the Devil could have ever done.  Because of the nefarious actions of then-Senator Lyndon Johnson America’s pulpits have gone silent on the political issues of the day for fear that violation of the “Johnson Amendment” would cause a local church to lose its tax-free designation granted by the God-hating IRS.

Rather than risk losing their tax-exempt status America’s pulpits have gone silent and thereby yielded the control of the political world to the doctrines of demons.  Today, the ministers have relinquished their first amendment rights in order to protect the church’s treasury.  That’s right.  They have silence the voice of God in exchange for thirty pieces of silver.

During the primaries President Trump recognized the problem and vowed to repeal the Johnson Amendment in a move that would free the pastors to once again speak for God on the issues of the day.  Well, here we are, over 200 days into the Trump administration and we have yet to hear a cry from the pastors to repeal the amendment.  You would think that these “men of God” would be chomping at the bit to speak the Truth from the pulpits.

But you would be wrong.  Have you heard of any movement from any pastoral group calling for President Trump to keep his promise and repeal the Johnson Amendment?  Of course you haven’t because it is cowardice that is keeping the pulpits silent…not the IRS.  Pastors are afraid of losing compliant pew sitters who pay the bills if they ruffle a few feathers.

It is in the church where politics and religion cross swords.  As hard as it is to fathom  Republicans and Democrats sit side by side in America’s churches and the pastor doesn’t want to do anything that might separate the sheep from the goats.

You heard me right.  Pastors don’t want to take on political issues because some of their donors may support their sodomite sons, or their post abortive daughter.  Or, get offended and leave the church. Feminism is rampant in the church and many women rule their homes and they don’t want the pastor waking up their husbands.  So the pastor avoids “politics” because he is simply too chicken to confront the sin in his own camp. 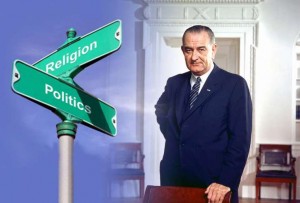 They LOVE the Johnson Amendment.  It is the skirt that they hide behind.  They claim that they don’t want to politicize their pulpit when, in fact, their silence is complicit in the confusion in this nation over what is right and wrong.

But here is the Truth.  Churches don’t need governmental approval to speak about politics.  The church, before it climbs in the bed through incorporation, is already IMMUNE from taxes.  Are you picking up what I am laying down?  Have you ever heard of the lie of the separation between the church and the state?  Well Dude…the government has no business poking its nose into the business activities of the church…at least not until the church reaches out and marries the government simply for the TAX EXEMPT benefits.  That’s right.  Church incorporation is a noose that the church slings over its own neck.

Did you know that some of the most God hating organizations in America hold the same symbiotic relationship with the government that most American churches have?  Did you know that Planned Parenthood is a 501(c)(3) organization just like your local church?  Did you know they are actively involved in politics? See the video below of a former Dallas Planned Parenthood Director speaking out about the “Monthly Abortion Quotas” that has been hidden from the public. It’s truly shocking, and must see.

How about the Southern Poverty Law Center?  Did you know that this Christ-hating organization has a similar tax exempt status as your church?  How about Right Wing Watch?   The Sierra Club?  Did you know that the ACLU is not Tax exempt…BUT…the ACLU Foundation is?  Can’t you see that these are simply different denominations of the religion of Atheism and Humanism doing all that they can to destroy Christian-America?

Yes, you read that right.  God-hating organizations have free speech rights…but Christian churches do not.  At least that is what the God-hating government wants you to believe.

Just this week some emails were captured that prove that there is an organized war against President Trump and conservative Christianity.  The Left is doing everything they can do to overturn a duly elected Presidency.

Check it out here.  It clearly spells out the strategy to undermine America.  Oh…did I mention that the lead organization Media Matters is a 501(c)(3) organization…just like your local Christian church?  I thought tax exempt organizations were not permitted to get involved in the political process?  Only Christian organizations, I guess.

America is playing by two sets of rules.  When, in the Name of God, will the Pastors take of their skirts, stand up and fight? It is time to take off the make believe muzzle.