The Meeting between Donald Trump and Religious Leaders

“The meeting lasted roughly two and a half hours and ended with pastors gathering around Trump and laying their hands on him in prayer.” -David Brody

As Donald Trump continues to hold a substantial lead in the GOP 2016 presidential race, many Christians have called his faith into question.

According to a Brody File report on CBN News, Trump recently met and prayed with about 40 pastors and religious leaders on Monday, for some 2 1/2 hours.

The huddle reportedly culminated with the leaders surrounding Trump, laying hands on him in prayer, asking the Lord to give him “wisdom, stability and knowledge,” as well as praying for America.

In the video taken by one of the attendees, Trump quietly stood grasping what looked to be a Bible, and appeared moved by the powerful prayer time. 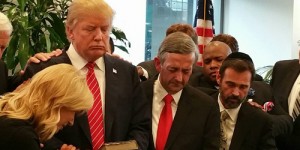 David Brody notes in his report that a few of the pastors present asked Trump to “tone down some of his harsh rhetoric,” and that he reportedly “received the message by nodding his head, listening attentively and not being combative at all.”

Brody also said Trump told the leaders that he will be a “strong supporter of Israel,” and that his agenda would include the battle to defeat ISIS, balance the budget, and eliminate the deficit.

Trump also mentioned the intolerance for and attack on Christianity and religious liberty.

Some of those pastors and leaders present at the meeting were: Pastor David Jeremiah, Jan Crouch, Pastor Paula White, Messianic Rabbi Kirt Schneider, televangelists Kenneth and Gloria Copeland, and others.

Correction: The original version of this story published on Sept. 30 incorrectly reported that Rabbi Kirk Schneider was a member of Jews for Jesus.