The Modern Interpretation of History 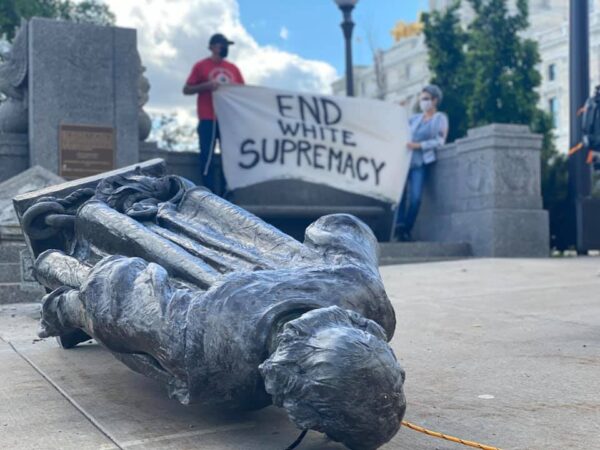 By Gerald Flurry – The Trumpet

People are attacking history. This is especially true of American and British history. They are filling the media with accusations that our greatest leaders were bloodthirsty, corrupt and, especially, racist. Protesters are spray-painting, toppling, beheading and destroying symbols of that history, including landmarks honoring Christopher Columbus, a pilgrim maiden, pioneers, George Rogers Clark, Abraham Lincoln, confederate generals, police officers, paralyzed American veterans, World War I victims, World War II soldiers, Winston Churchill and many others.

Our history shapes our present and our future. How have we come to such a miserable, hateful, grossly inaccurate perspective on even our own history? And what does this mean for our future? The answer is found in historians’ fundamental method. Whatever else they may disagree on, they agree that human history has not been shaped by God.

To take one example, the historian Homer Carey Hockett warned his students to avoid historical texts that mention God and the Bible. He wrote: “Moreover there are some kinds of statements which are rejected even without being subjected to the usual tests. The historian must reject … statements reporting happenings which do not conform to the laws of nature as established by scientific methods.”

So they exclude any possibility of the divine. The words of the Bible pertain to the spiritual, and historians consider that ignorance. They exclude miracles; they ignore God’s prophecies; they push aside the revelation of His truth.

Historians have left God and the Bible out of history. But by what authority?

In the Worldwide Church of God in 1962, during the days of founder Herbert W. Armstrong, Dr. Herman Hoeh wrote a book asking this question. It is a profound question—truly one of the most profound we could possibly ask, especially of historians today!

Mr. Armstrong was chancellor of Ambassador College in Pasadena, California. In an article he wrote about education, he heavily quoted the first chapter of Dr. Hoeh’s book, titled “The Modern Interpretation of History.” I want to share with you what he wrote, and I believe you will be shocked and enlightened by this subject like I was. 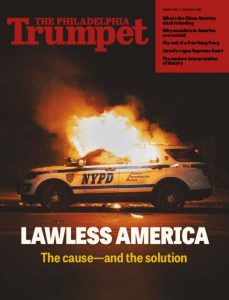 That chapter begins with that crucial question: “By what authority have historians left God and the Bible out of history?” “This question may come as a surprise,” Dr. Hoeh wrote. “Many are unaware that a radically new interpretation of history is being taught in schools and colleges today. It is a history of the world in which God and the supernatural are rejected.”

“It is impossible to believe both this history and the Bible! Both cannot be right,” he continued. Yes, the modern interpretation of history is in open conflict with God’s Word! Historians know this.

Leaving God out of history brings chaos and confusion. Still, most people have assumed that secular historians are right. They assume historians have definitive answers to important questions such as how man originated, why man exists, and where man is going. They have faith in secular history, but they haven’t proved that faith.

One famous historian, Hendrik van Loon, confessed: “We live under the shadow of a gigantic question mark. What are we? Where did we come from? Whither are we bound?” He knew he couldn’t answer the pivotal questions of human existence! Yet he answered, “We still know very little, but we have reached the point where (with a fair degree of accuracy) we can guess at many things.”

Today, guesses masquerade as authoritative history! Are you really going to rely on guesses about the biggest questions ever asked? None of us should guess. We have conclusive answers you can count on.

Standing in Judgment of History

“Casual readers would be shocked to learn how history books are prepared,” Dr. Hoeh wrote. “It is usually assumed that history is solely a matter of collecting factual material, judiciously evaluating it, and recording it for posterity.” He then quoted historian C. W. Ceram, who warned: “Nothing could be farther from the truth.”

“A historian is not a scribe, but a judge of the evidence that is brought before him,” Dr. Hoeh continued. “He is his own final authority. He is not judged by, but sits in judgment of, history. Whatever evidence does not conform to the commonly accepted beliefs of the age or community in which he lives he summarily rejects!

“History, in other words, is based only on that part of evidence which agrees with the prevailing opinions of the society in which a historian lives. These may be shocking evaluations, but they are true. World history texts prove it. Historians admit it!” People are biased. Historians are biased. History is biased! And the biggest bias of all in this modern history is that historians have ripped Bible history right out of their accounts! This is a serious omission!

The world faces many serious problems today. We have a deadly virus, and even worse, responses from government that are driving nations into terrifying debt and social breakdown. We have serious political division, racial conflict, international conflict, increasing military and arms spending, rapidly advancing weapons development. We face the possibility of human annihilation!

This is the problem with so much modern history: Historians appoint themselves as interpreters and judges, and they ignore or remove any facts they deem inconvenient. The fact is, only God can save us from our problems! Yet we are leaving God out of our history and out of our lives! This is more dangerous than any other problem I have described! God is wrathful at our rejection of Him! He calls the modern descendants of Israel – mostly the United States and Britain – “the people of my wrath” (Isaiah 10:6).

Read the history books and you see how they ignore the Bible, if they don’t flatly deny it and undermine it. But the Bible is the only book that can answer our gigantic questions and solve our gigantic problems!

If you want to prove the Bible, look at biblical prophecy. Prophecy proves God’s existence and the veracity of His Word. You can prove that if you are willing to let go of the personal biases and prejudices we all have. Only God is completely unbiased and free of prejudice, and we must learn to see things as He does. 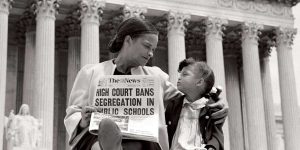 The day after “Brown v. Board of Education” was announced, Nettie Hunt sat on the steps of the U.S. Supreme Court and explained the decision to her daughter

Dr. Hoeh recounted a major Supreme Court case from 1954, Brown v. Board of Education. He focused on one aspect of how that case was argued that reveals what is wrong with our historians and our history. One side brought in a noted historian. He later explained to his fellow historians what he did: “The problem we faced was not the historian’s discovery of the truth, the whole truth and nothing but the truth; the problem instead was the formulation of an adequate gloss … It was not that we were engaged in formulating lies; there was nothing as crude and naive as that. But we were using facts, emphasizing facts, bearing down on facts, sliding off facts, quietly ignoring facts and, above all, interpreting facts in a way to … ‘get by’ ….”

Historians on all sides of many arguments and problems commit this same fundamental error! This is precisely the problem with so much modern history: Historians appoint themselves as interpreters and judges, and they ignore or remove any facts they deem inconvenient. They reject God as historical Judge, appoint themselves as judges, and judge history with an entirely materialistic, “evolutionary” view.

The Apostle Paul wrote about this type of view, and it is certainly prophetic of our day: “For the wrath of God is revealed from heaven against all ungodliness and unrighteousness of men, who hold [that is, hold down or suppress] the truth in unrighteousness” (Romans 1:18). Many older historians at least included God in their writings, but men have always suppressed God’s truth in some way or other.

Historians are still suppressing God’s truth! They omit the truth and eliminate God and the Bible as they interpret history. That is a serious problem!

“Because that which may be known of God is manifest in them; for God hath shewed it unto them” (verse 19). God showed them! God has revealed Himself through His creation. His truth is accessible to anyone with an open mind and humility. “For the invisible things of him from the creation of the world are clearly seen, being understood by the things that are made, even his eternal power and Godhead; so that they are without excuse” (verse 20). Still mankind rejects their Creator! There is no excuse for such willful ignorance!

Historians say Jesus Christ is a myth, that miracles are fantasy, that the Bible is nothing but legend and superstition. They try to intimidate you into going along with them. But God says they have no excuse for their ignorance! He holds people accountable for what they should know.

God is real! He created us. And He reveals Himself and His purposes in His Word. Human beings are not animals. We are not a product of evolution, which is and always will be an unproved theory! God created humans with His mind and the potential to build His character (Genesis 1)—elevating us far above the station of animals. 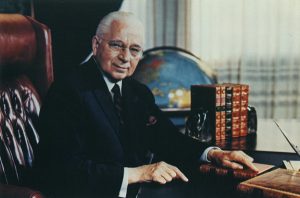 In his booklet Does God Exist?, Mr. Armstrong gave the example of an intricate, finely crafted watch. Wouldn’t it be absurd to think that watch simply appeared out of nowhere, without a creator? God’s creation makes that watch look trivial by comparison! Even a hummingbird is infinitely more complex than the highest quality watch. The great King David said only a fool could believe there is no God (Psalm 14:1).

Give God a Voice

The historian from the court case discussed above later said: “I was facing the deadly opposition between my professional integrity as a historian and a contemporary question of values, of ideals, of policy, or partisanship and of political objectives. I suppose if a man is without scruple, this matter will not bother him, but I am frank to say that it bothered me terribly ….”

Modern historians are pressured to choose between contemporary values and truth! That historian concluded: “I am convinced now that this interpretation, which we hammered out with anything but historical truth as our objective, nonetheless contains an essential measure of historical truth.” Astounding! Anyone with the authority to speak the truth to the people will be held accountable by God. Speaking something close to the truth isn’t good enough!

Shamefully, historians reject God and then set themselves up as judges of history. Readers of history are then left to accept those human judgments as truth. 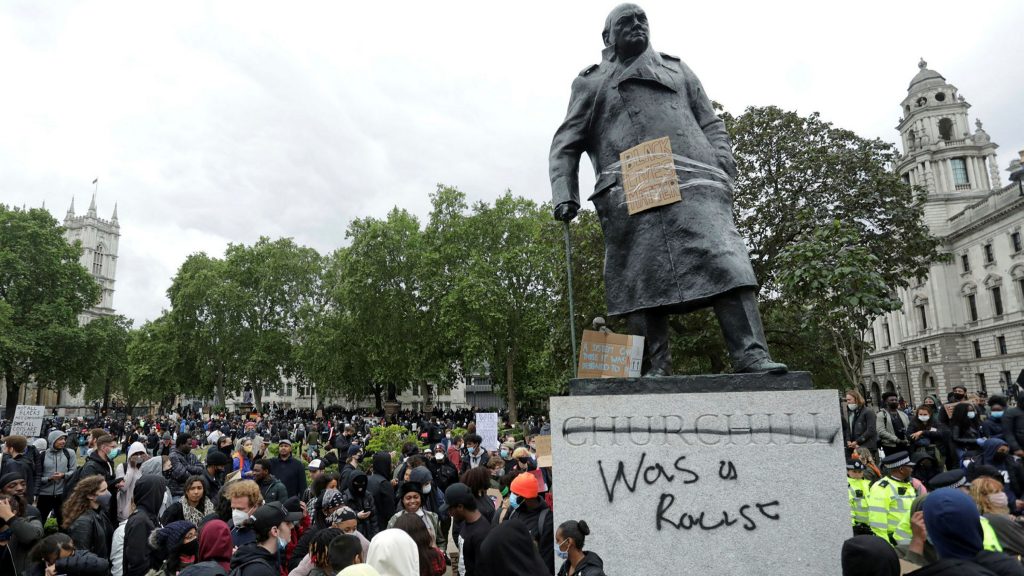 Statues in many nations have been defaced and destroyed, such as this of Winston Churchill outside Parliament in London.

When will historians give God a voice?

The “historical method” of study, as Dr. Hoeh wrote, “rests on only one fundamental—and unprovable—hypothesis: that God has never and does not now intervene in, or determine, the course of history.” But the truth is that God has always intervened in the world to work out His master plan!

Don’t make that mistake. You can prove God and His active presence in the world today. He has been around throughout all history, and He has recorded so much important history in His Word. Thank God for that! Thank Him for proving Himself to us. And the fact that we can include Him in our study of history is wonderful news!