Out of the dismal swamp of this political season, a strange myth has emerged and gained traction: Donald Trump is winning support among evangelical voters. But the opposite is closer to the truth: Many evangelicals actively oppose Trump.

For example, a recent Politico article highlighted Trump’s outreach to evangelicals but buried references to his three marriages and pro-abortion positions. The story said Trump is being “well received” by evangelicals but ignored outspoken evangelical critics such as Russell Moore of the Southern Baptist Convention, the nation’s largest evangelical denomination. 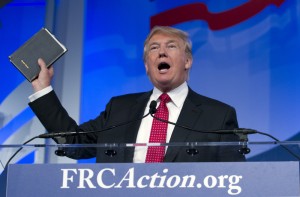 Republican presidential candidate, businessman Donald Trump, holds up his bible who was giving to him by his mother as he speaks during the Values Voter Summit, held by the Family Research Council Action, Friday, Sept. 25, 2015, in Washington ( AP Photo/Jose Luis Magana) ORG XMIT: DCJL120

The myth likely started in August, when a Fox News poll said Trump was the top choice of “white evangelical” voters. But polls like this use methodology that allows respondents to self-identify their religious affiliation without any examination of their actual beliefs. Shooting off Roman candles on New Year’s Eve doesn’t make you a Roman Catholic, and watching Joel Osteen on TV doesn’t make you an evangelical.

Chris Anderson, president of Anderson Robbins Research, which helped conduct the Fox News poll, told me the survey question asked, “Would you describe yourself as a born-again or evangelical Christian?” That may sound like a straightforward question, but people who do religion polling for a living know a dirty little secret: People lie, and there’s no way to know they’ve lied unless you ask more questions that expose the lie. A famous Barna survey found that while more than 25 percent of Americans self-identify as evangelicals, less than 10 percent actually hold historically evangelical beliefs, such as the divinity of Jesus, a historical resurrection, and the authority of the Bible.

Another problem: A small sample size can increase the margin of error in a survey. Fox News surveyed 1,008 registered voters, which is not out of line with other national surveys, many of which are in the 1,000 to 1,500 sample-size range, but it is on the low side (a recent CBS/YouGov survey contacted more than 4,800 voters in Iowa, New Hampshire, and South Carolina alone). But once you drill down to the so-called “evangelicals” in the Fox News survey, the sample size is so small that the margin of error is likely close to 10 percent. (It’s interesting that the Fox News survey results listed the margin of error for every subgroup except evangelicals, but based on the margins of the other groups, 7 to 9 percent is a reasonable guess.)

I don’t believe those who conducted the Fox News survey are incompetent or motivated by ideology (Anderson Robbins Research leans left, while its collaborator, Shaw & Company Research, is run by Daron Shaw, a University of Texas professor with close ties to former GOP presidential candidate Rick Perry). But when it comes to religion, public opinion polling is imprecise, and nuance matters. And this survey—however well-intentioned its sponsors—got it wrong, leading to the false narrative of Trump’s evangelical support.

In fact, it’s difficult to find any evidence other than this Fox News survey that shows Trump favored by evangelical voters. A close examination of data from other sources suggests evangelicals are among the least likely to support Trump. Gallup did a survey of religious voters and found that Trump received just a 22-percent favorability rating among the “highly religious” respondents, which Gallup says more accurately represents true evangelicals.

Trump is good for TV ratings, so the major networks are going to be sad to see him go. That’s why they are doing what they can to make him appear relevant. Trump’s ascendancy also supports the narrative of many liberal commentators that Republicans are arrogant and boorish and “addicted to outrage.”

But evangelical Christian voters know better. They look at Trump and see a man whose political positions, personal lifestyle, and bombastic rhetoric are not consistent with what they know their evangelical doctrine and theology teaches.

It’s the pollsters and the mainstream media who are having trouble keeping up.