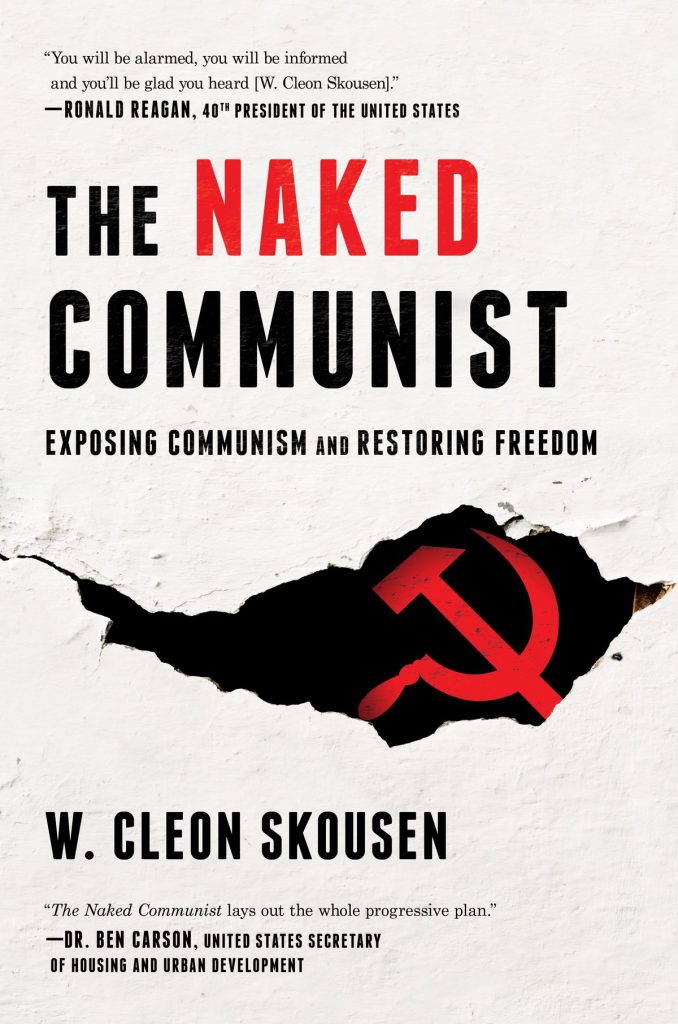 The Naked Communist has sold more than a million copies. It found its way into the libraries of the CIA, the FBI, the White House, and homes all across America. The Naked Communist contains a distillation of more than a hundred books and treatises on communism, many written by Marxist authors. We see the communist the way he sees himself—stripped of propaganda and pretense. Explained here is the amazing appeal of communism, its history, and its basic and unchanging concepts—even its secret timetable of conquest.

This book has been called “the most powerful book on communism since J. Edgar Hoover’s ‘Masters of Deceit’.” In one clarifying and readable volume, the whole incredible story of communism is graphically told.  It includes the tragic story of China, Korea, Russia, the UN, Alger Hiss, Whittaker Chambers, Elizabeth Bentley, General MacArthur, and others.

In 1961, Skousen added the 45 goals of communism. Today, all but one of those goals is fulfilled and now you can read about it in an updated version.

Among the many questions it answers are:

Who gave America’s nuclear secrets to the Russians?

How did the FBI fight the battle of the underground?

Why did the West lose 600 million allies after World War II?

What really happened in Korea?

What is communism’s great secret weapon?

Is there an answer to communism?

What can I do to stop communism?

But the most important question of all that this book answers is how to stop communism and how to do it without a major war. National broadcaster Paul Harvey at CBS said, “I have never given any volume such an unqualified endorsement.”

Here’s what people have said about the naked Communist:

No one is better qualified to discuss the threat to this nation from communism. You will be alarmed, you will be informed. – Ronald Reagan, United States President

“The Naked Communist lays out the whole progressive plan. It is unbelievable how fast it has been achieved.” – Dr. Ben Carson, Surgeon, Philanthropist, Journalist

“Skousen predicted someday you won’t be able to find the truth anywhere because the history of this country is going to be hijacked by communists. I think we are there.” – Glenn Beck, radio host

“I feel certain that your efforts on this important subject (communism) will receive widespread attention and consideration.”  – J. Edgar Hoover, Director of the Federal Bureau of Investigation

“We believe in a moral code. Communism denies innate right or wrong. As W. Cleon Skousen has said in his timely book, The Naked Communist: The Communist ‘has convinced himself that nothing is evil which answers the call of expediency.’ This is a most damnable doctrine. People who truly accept such a philosophy have neither conscience nor honor. Force, trickery, lies, broken promises are wholly justified.”  – Ezra Taft Benson, Secretary of Agriculture under President Dwight D. Eisenhower