The noise of life 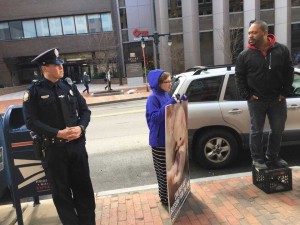 (WNS)–Pastor Andrew March knows it is the content, not the volume, of his speech outside a Portland, Maine, Planned Parenthood facility that has him at odds with the state’s noise ordinance. He is asking the U.S. Supreme Court for relief from the law Planned Parenthood is using to silence his pro-life message.

Planned Parenthood staffers did not complain Dec. 4, 2015, when climate change protesters paraded under the second-floor windows of their downtown Portland facility. But when March’s solitary, unamplified pro-life message drifted into their windows from the sidewalk below, they called the police to enforce the noise ordinance.

March, pastor of Cell 53 in Lewiston, Maine, sued the city and state claiming the law’s provision indicting a speaker’s “intent” is unconstitutional. The lawsuit also contends only pro-life speech is targeted for volume control on Portland’s Congress Street, the city’s primary thoroughfare.

A district judge agreed with March but the 1st U.S. Circuit Court of Appeals reversed that ruling Aug. 8. March filed an appeal with the Supreme Court in November.