The School Attack You Probably Didn’t Hear About 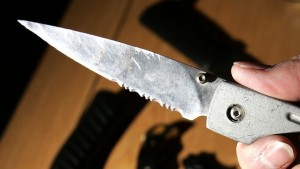 The left and their allies in the mainstream media continue to push their agenda on all Americans with their propaganda and carefully-crafted media narrative. They attack our values at every turn and aim to take away whatever liberties they deem necessary in order to control the nation’s perception – whether alternate lifestyles, socialist medicine, or gun control, the left has declared all-out war on our foundational values.

Now, there has been another incident of violence in our schools.  There’s a reason you didn’t hear much about it, and this trend could have serious consequences.

SAUK RAPIDS, Minn. — Police are investigating after a second grader in Minnesota brought a knife to school and cut three students, according to WCCO. Officers went to Pleasantview Elementary School in Sauk Rapids around 7:15 a.m. Monday after the student brought a kitchen knife to school. The boy allegedly cut three children with the knife in less than a minute. Two of the students were cut in the back of the head and required stitches.

Following the attack, the 8-year-old student walked to the office and turned over the knife.  He was taken to the police station, but criminal charges cannot be filed against children under 10 in Minnesota.

The student was released to his parents, and both social services and the prosecutor’s office are investigating.  As yet, no official statement has been released about the incident or whether there were previous concerns about the student’s mental health.

Because the incident took place early in the morning prior to the start of classes, the school day at Pleasantview went on as scheduled. While counselors are on site to offer support to any students or parents who have questions, the reaction to this violent attack is a far cry to that of school shootings.

The story was briefly touched on by local news outlets but received little coverage in the national media, and follow-up information has been non-existent. Had this been a school shooting and not a knife attack, you can bet the mainstream media would have had 24-hour intensive coverage in order to further their gun control message. The left seems to think the only newsworthy incidents of violence are those committed with firearms.

While the Pleasantview student was stopped by an adult staff member, no one on staff was armed should the need have arisen to prevent a worse attack. Gun Free Zones and the inability of school faculty and staff to defend themselves and students continues to be a root cause of school violence.

In fact, if the left continues to infringe upon the right of American citizens to keep and bear arms – especially for self-defense — our nation could be facing a crisis of epic proportions. A warning of the dangers of restricting our freedoms – or taking them away all together – can be seen with the current state of violence in London.

London Mayor Sadiq Khan recently announced a major crackdown on knives following a rapidly increasing homicide rate due to violent attacks. This follows the strict gun laws already in place in the UK, and yet the rates of violent crime and murder continue to escalate.

“No excuses: there is never a reason to carry a knife,” Khan tweeted. “Anyone who does will be caught, and they will feel the full force of the law.” Guns are strictly regulated in the United Kingdom and the rising homicide rate in London is directly attributable to a rise in knife-related crimes, with stabbings claiming at least 31 lives to date in 2018. In Britain, it is currently illegal to carry a knife longer than three inches in public “without good reason” and illegally carrying a knife can be punished with up to four years in prison and an “unlimited fine.”  Self-defense is not listed among the examples of “good reasons to carry a knife.” The courts determine if someone’s reason to carry a knife is valid.

This frightening scenario of being incapable of defending ourselves, our families, and our property could happen here in the very near future if the left gets their way.  For now, they are focused on gun violence – continuing to blame weapons instead of people for tragic acts.

The school attack in Minnesota is just another example of a possibly disturbed child seeking to commit a violent act, and school personnel woefully unprepared to protect our students. And the lack of news coverage – especially in relation to that of school shootings — just goes to show the liberal bias of a media who has become the organizing arm of the left.